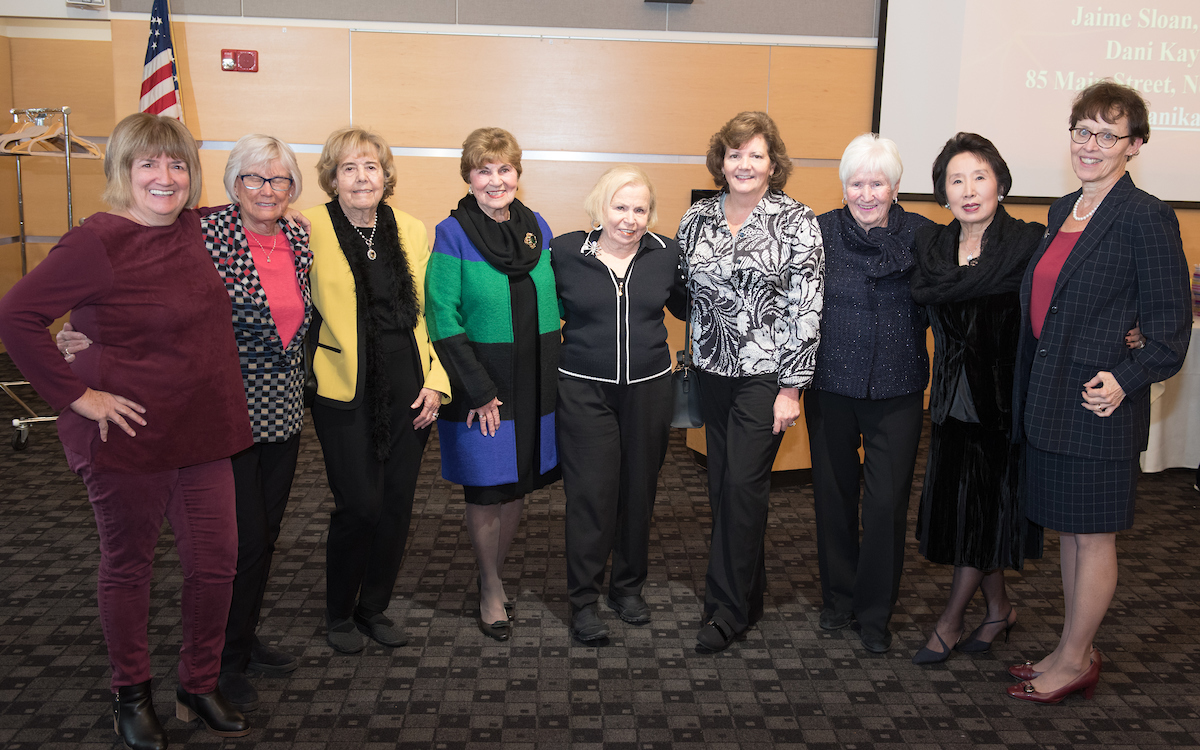 Women of NECC Board

Supporting NECC and its Students

The Women of Northern Essex Community College is a volunteer organization dedicated to assisting NECC and its students. The organization generates funds for student scholarships and special projects by conducting a variety of fundraising events throughout the year, including a Fall Membership Tea, a Holiday Party and a June Gala Open House event.

The Women of NECC’s Annual June Open House Event, that was scheduled for June 6th, has been cancelled. We will be looking into rescheduling this event at a later time.

Thank you for your support and if you have any questions, please contact Lori Smerdon at lsmerdon@necc.mass.edu.

The Women of NECC Holiday Party was held on December 9th at the Andover Country Club and featured guest speaker Karen Andreas, Regional Publisher from the North of Boston Media Group.  Attendees enjoyed another successful event with all proceeds benefit the Women of NECC Scholarship Fund.

The Women of NECC enjoyed an afternoon of lunch and fashion featuring Jaime Sloan, owner and creative mind behind Dani Kaye fashions.  The event raised funds for the Women of NECC Scholarship Fund.  Thank you to Dani Kaye Fashions, Dino International and Flowers by Steve for supporting the event!

The Women of NECC held their 23rd Annual June Open House fundraiser on Saturday, June 1st at the home of Charles & Ann Lagasse in Newburyport with over 90 people in attendance.  Guests attended the fundraiser, enjoyed catered food by The Party Connection, the beautiful floral arrangements that were donated by Flowers by Steve and participated in a silent auction and raffle raising funds for student scholarships.

The Women of NECC celebrated their annual holiday luncheon on Friday, December 7th with guest speaker Paula Moore.  Paula is a member of the Women of NECC and has written a book titled “Wicked Rich:  The Adventures of a Mad Lottery Winner.”  The event was recently featured in the Eagle Tribune:  Women of NECC in Stepping Out.

Nearly $3,000 was raised for student scholarships during the Women of NECC’s Membership Tea featuring Newbury author Andre Dubus III  on October 24.  Andre discussed his newest novel “Gone So Long”, along with a book signing and meet and greet to well over 110 guests.  This was Dubus’s second appearance at Northern Essex.  Visit our newsroom for photos of the event.

The annual June Open House Event was held on June 9, 2018 at a beautiful home located in North Andover, MA.  This Annual Fundraiser raises funds for the Women of NECC Scholarship Fund.  Since their founding, the women have raised over a half a million dollars for the college and awarded over $330,000 in scholarships.  Photos from the event featured in our newsroom.

The Women of NECC hosted its annual holiday luncheon with guest speaker Boston Journalist Maria Stephanos on Monday, December 4, 2017 at the Andover Country Club. The event was a great success with over $3,700 raised for student scholarships.

The Women of NECC’s Membership Tea featuring Sondra Celli was a great success.  Thank you to Sondra and all supporters of the event, we were able to raise over $4,700 which will benefit the Women of NECC Scholarship Fund.

June 3, 2017 was a great night for the Women of NECC’s Open House event.  Guests attended this fundraiser with over $8,000 raised for student scholarships.

Special Thank You to the Women of NECC Board Members for all their support!

Check out our press release

The Women of NECC’s yearly membership runs from Sept. 1 through August 31, although you are welcome to join at any time and begin participating immediately in the activities. The Women of NECC do so much good and have such a good time while doing it! We hope you will consider joining.  Simply download the Women of NECC Membership Brochure, complete the membership form, and mail it in along with your contribution.

If you prefer to join online, you may do so here, designation would be under “other” and please put in the comment section that your donation is for the Women of NECC Dues Membership.  Any questions, please contact Lori Smerdon at 978-556-3789 or  lsmerdon@necc.mass.edu.

We’re here to help. Contact us if you have questions.