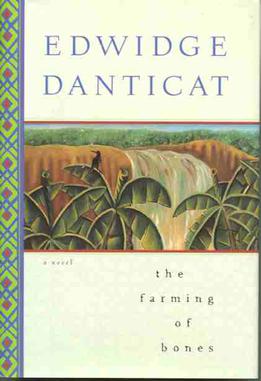 “The Farming of Bones” is a powerful and haunting novel set in the Dominican Republic during the brutal Trujillo regime.

This is a BYO-lunch event, but cookies and water will be provided!

Print, audio, and e-book copies are available at both libraries!

It is 1937 and Amabelle, a young Haitian woman living in the Dominican Republic, has built a life as the servant and companion of the wife of a wealthy colonel. She and Sebastien, a cane worker, are in love and plan to marry. But Amabelle’s world collapses when a wave of genocidal violence, driven by Dominican dictator Rafael Trujillo, leads to the slaughter of Haitian workers. Amabelle and Sebastien are separated. She desperately flees the violence for a Haiti she barely remembers.

Already acknowledged as a classic, this harrowing story of love and survival is an unforgettable memorial to the victims of the Parsley Massacre and a testimony to the power of human memory.