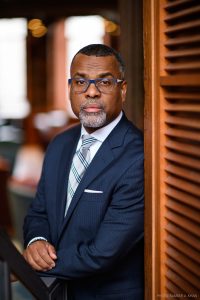 Eddie S. Glaude Jr., chair of the African American Studies Department at Princeton University, will deliver a virtual White Fund Lecture presentation titled “The Ethics of Anti-Racism” on Wednesday, May 5 at 6:30 PM.

Free and open to the public, with pre-registration required, his presentation will deconstruct the idea of whiteness and the way in which it determines the distribution of advantage and disadvantage in this country.

An author, political commentator, public intellectual, and passionate educator, Glaude calls on his audiences to engage in an ongoing critique of racism’s manifestations, challenging people to think more carefully and systematically about racial issues.

Glaude’s writings include “Democracy in Black: How Race Still Enslaves the American Soul,” “In a Shade of Blue: Pragmatism and the Politics of Black America,” and his most recent, the New York Times bestseller, “Begin Again: James Baldwin’s America and Its Urgent Lessons for our Own,” which takes a wide look at Black communities, the difficulties of race in the United States and the challenges we face as a democracy.

In his writing and speaking, Glaude is an American critic in the tradition of James Baldwin and Ralph Waldo Emerson, confronting history and bringing our nation’s complexities, vulnerabilities, and hope into full view.

Glaude is the James S. McDonnell distinguished university professor and chair of the Department of African American Studies at Princeton. He frequently appears in the media, as a columnist for TIME Magazine and as an MSNBC contributor on programs like “Morning Joe” and “Deadline Whitehouse with Nicolle Wallace.” He regularly appears on “Meet the Press” on Sundays. Glaude also hosts Princeton’s AAS podcast, a conversation around the field of African American Studies and the Black experience in the 21st century.

To register for the presentation, fill out this form or contact Analuz Garcia at agarcia@necc.mass.edu