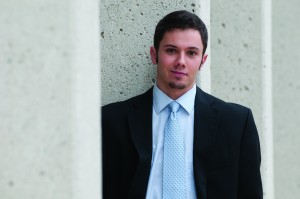 Ryan Valente claims he was slow to get serious about his future, but after hearing about his accomplishments at a very young age, it is hard to believe him.

At just 20 years old, he has already graduated from Northern Essex with high honors and he is currently enrolled as a junior at Suffolk University, where is the recipient of a prestigious $13,000 Dean’s Scholarship.

His long term goal is to get a law degree and a Master of Law in Criminal Law – he would love to attend Suffolk Law School – and eventually become a prosecuting attorney, a career which he feels will allow him to make a difference in his community.

After graduating from Timberlane Regional High School in 2008, Ryan enrolled at Northern Essex, primarily because the college had an ABA (American Bar Association) approved Associate Degree Program in Paralegal Studies.

Ryan admits he did not do as well as he could in high school, but he has certainly soared at Northern Essex where he earned a 3.96 grade point average and participated in the Honors Experience, a challenging program for highly-motivated students.

He also honed his leadership skills while on campus, serving as parliamentarian of the Student Senate, sitting on the executive board of the Paralegal Club, and participating in the Student Leadership Development Program.

What made the difference for Ryan, allowing him to so fully discover his talents and interests and immerse himself in the learning process? Ryan credits the teachers he encountered at Northern Essex, such as his advisor, Judith Ciampi, coordinator of the Paralegal Program. “Judy believed in me,” he said. “She saw my passion, knew I could do it, and encouraged me at every step of the way.”