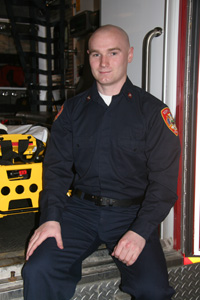 Kristofer Jenkins had no interest in college when he graduated in 2005 from North Andover High School. So he enlisted in the Marine Reserves, completed boot camp, and with nearly two years until his deployment, turned to Northern Essex thinking he might find a course or two that interested him. What he found was a career path that would build on his skills and interests.

Initially he enrolled in criminal justice courses, but after serving in Iraq from Sept. 2008 until April 2009 as a “combat lifesaver,” which provides basic first aid to fellow Marines, he had a change of heart and direction.

At NECC he was encouraged to complete the basic EMT certificate program. During this time he took the state’s civil service exam and was hired as a firefighter for the town of North Andover. After completing the EMT course he became a full-time EMT/firefighter assigned primarily to the ambulance.

His career decision was the right one, he says. “Most of the people we serve are happy to see us and the family members are always thankful when we help out a loved one,” he says. It is a very rewarding job.”

He says Northern Essex played a significant role in preparing him for the job. “I would absolutely recommend Northern Essex to anyone. I would tell them to go for it. It’s a great school. You hear about all the success stories that come out of there all the time,” he says.

Jenkins says he isn’t finished with his education just yet. After returning from Afghanistan next spring, Corporal Jenkins will attend the firefighter academy and continue on to earn an associate, bachelor’s, and quite possibly a master’s in fire science using his GI Bill benefit.