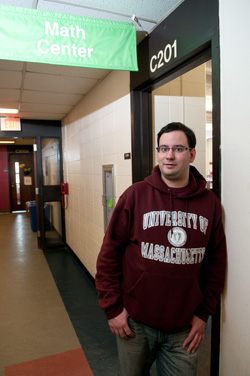 Many people make life-changing decisions after facing a mid-life crisis but for Scott Hume it was a “quarter-life crisis” that prompted him to give up his full-time job and re-enroll in college.

At the age of 25, Scott realized that, because he didn’t have a college degree, he had no chance of advancement in his current job. “I knew that a degree would make me so much more marketable and I was willing to take a step back to make it happen.”

Scott had attended college right after graduating from Greater Lowell Technical School in 2001 but he let Basic Algebra II discourage him for continuing. Never a fan of math, he just couldn’t seem to pass that course and, at that time, didn’t have the maturity to see it through.

His biggest fear about coming back, not surprisingly, was passing math, but luckily he met Professor Linda Murphy and with her help and the help of the college’s Math Center—he calls it one of the college’s biggest assets— he passed Basic Algebra II with an A.

With renewed confidence and the continued support of the Math Center, Scott went on to earn A’s in college algebra, statistics, and calculus. After graduating from Northern Essex with a business transfer degree in the spring of 2010 he transferred to the Isenberg School of Management at UMass Amherst where he is in his second semester and excelling academically.

While at Northern Essex, Scott spent a semester in Orlando, Florida, as a participant in the Disney College Program, an experience that helped define his career path.

Working in merchandising for Disney and attending their courses and workshops, Scott discovered that hospitality was the perfect career fit for him. “I love to travel and I love working with people,” says Scott. “With hospitality, I can pull it all together.”

When he graduates from UMass, Scott plans to work in human resources for a large hotel chain.