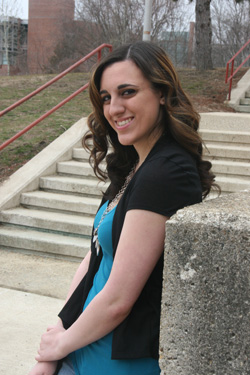 Cost, convenience, and most of all, transferability, were all considerations for Cristina Napoli when she was exploring her college options. Happily, she found all three at Northern Essex.

“Finances played a big part in my enrolling at Northern Essex,” says the 2008 Methuen High School graduate. “The college was cost effective and it was close to home.”

She enrolled at NECC under the transfer agreement program, which guaranteed her acceptance to another state school once she earned her associate degree.

A budding writer, Cristina discovered another perk when she enrolled at Northern Essex – its journalism program. After writing as a correspondent for the college’s school newspaper, NECC Observer, she went on to serve as its arts and entertainment editor. This experience helped her outline her educational plan. After graduating from Northern Essex, she decided she wanted to transfer to a school with a four-year journalism program.

As a first-generation college student, Cristina was eligible for, and took advantage of, the Pathways to Academic and Career Excellence (PACE) Program and some of its services including transfer advising and sponsored bus trips to four-year colleges and universities.

It was during one of these bus trips that she became familiar with and interested in UMass Amherst. A second trip to the university confirmed her decision.

“The size was intimidating, but it just felt right,” she says.

After graduating with her Associate Degree in Liberal Arts: Journalism/Communications option with a 3.6 GPA, Cristina enrolled in UMass Amherst’s journalism program. She hopes to graduate in May of 2012, and go into publishing and editing.

“I would tell anyone to give Northern Essex a chance. Come here first,” she says. “I developed great relationships with the professors and students of all ages. I left here without any debt and a sense of accomplishment because I left with an associate degree.”