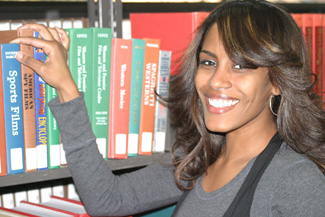 A handful of area residents, who are recent Northern Essex Community College graduates, are making their television debuts this summer in advertisements promoting the college.

The ads, produced by The Troupe, a modern media and design production company located in Windham, NH, feature Yeimy Medina and Steven Cabrera of Methuen, Abraham Batista of Lawrence, Shannon Sheltra of West Newbury, and Jessica Dick of Haverhill.

They are being aired on various cable networks including MTV, ESPN, USA, TNT, Bravo, FX, E, Fox News, Lifetime, and NECN, as well as on Red Sox broadcasts on NESN.

Abraham came to Northern Essex after graduating from Lawrence High School in 2007. He graduated in May with a certificate in computer information technology and will transfer to UMass Lowell to work toward a bachelor’s degree.

“Academics have to be the priority,” he says. “I have to focus on what’s important, my education. The support services at NECC helped me reach my academic goals as a college student.”

It was desperation that brought Shannon to NECC. After her partner and father of two of her children passed away suddenly, she lost their farm to foreclosure and was desperate for a career that would place her in the workforce quickly. She found what she was looking for in NECC’s respiratory care program. Today, this high honors grad, works as a respiratory therapist. In the fall, she will enter the biology program at Tufts University. She hopes to become a pediatric pulmonologist.

“I didn’t come to Northern Essex seeking self enrichment,” Shannon said. “I came here because I needed to pay the bills. You are just never too old to go back to college.”

After losing her job, Yeimy was lucky to find another, but the experience helped her realize education is the key to advancement in the workforce. She enrolled in the accelerated business program and graduated with an associate degree after just 19 months.

“I was only able to come to school two nights a week and then do the rest of the work online,” said Yeimy. “I think that was a great balance.”

Steven had seen his share of mischief as a street kid growing up in Lawrence. When he enrolled at NECC, he too started with fundamental classes with idea of one day working with juvenile delinquents. He is one step closer to that reality. He graduated in May with an Associate of Science degree in Criminal Justice with honors. He hopes to earn a bachelor’s degree over the next few years.

“I love that the Northern Essex professors explain the material with real life experiences. Most of my professors work in the criminal justice field so they had a lot to show us,” Steven said. “They want you to always be successful.”

A 2009 graduate of Central Catholic, Jessica has known for some time that she wants to become an English teacher and teach at her alma mater. Northern Essex is helping her realize her dream. In May she graduated with an associate degree in liberal arts wit high honors. She received the Chancellor’s Scholarship to UMass Boston where she will work toward a bachelor’s degree.

“I started at Northern Essex knowing that I would get the same education my friends are getting at four-year institutions, but I’m spending a lot less money,” said Jessica.

To view these ads visit the college’s recently created YouTube site at https://www.youtube.com/user/NorthernEssexCC