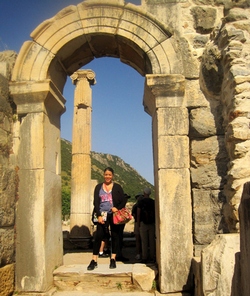 NECC student Mariela Sanchez, standing in an archway at the ruins of ancient Ephesus.

Wading in the natural hot springs at Pamukkale, Turkey, sitting on a roof-top hookah lounge in Selcuk, Turkey, climbing Cotopaxi in South America and spending the night at a 300 year-old hacienda being serenaded by a local highland band, are just a few of the experiences Northern Essex Community College students had during two separate study abroad trips offered this summer.

“We visited Troy, well known for the historical/mythological Trojan War, where we toured ruins of the ancient city, as well as managed to see a replica of the famed Trojan Horse, which was used in the Hollywood movie, “Troy,” says Arford.  “We also visited ancient Ephesus, one of the world’s most impressive Greek/Roman empire sites, including what remains of the Temple of Artemis, considered one of the Seven Wonders of the Ancient World.”

In addition to these sites and some other smaller archaeological sites, the group explored some of the more recent history of Turkey through touring some of the spectacular mosques of Istanbul, and visiting the city of Konya, center of the Sufi sect of Islam.  At Konya they visited the tombs of some of the great Sufi masters, including that of the 13th-century Jelalludin Rumi (Mevlana) who is well known throughout the world for his poetry.

Meanwhile, in Ecuador, South America, 14 students, accompanied by Marcy Vozzella, professor of natural sciences and coordinator of the NECC International Studies Program, and Ken Thomas, professor of biology, were climbing Cotopaxi, a stratovolcano in the Andes Mountains, located about 28 km (17 mi) south of Quito. Cotopaxi is the second highest summit in the country, reaching a height of 5,897 m (19,347 ft).  The trip was part of a course titled “Field Studies in Natural Systems: BioGeology of the Andes Mountain and the Amazon Rainforest.”

“The highlights for the students were the five days in the heart of the rainforest and climbing Cotopaxi,” says Vozzella. “Interestingly enough many students reported that the night we spent at a 300-year-old Hacienda was one of the most magical of the trip. The building brought to life for them a rich history and culture.  A small local highland band played a private concert for us and we all enjoyed a night of dancing in the old halls of a historic palace. It was nothing short of amazing.”

In addition to traditional semester and year-long study abroad programs, Northern Essex offers short-term study programs which are approximately 10 days in length, giving working students the opportunity to experience studying abroad.  Students in the credit courses meet two to three times before the trip and then after they return.

NECC’s International Studies Program is working on three international courses for next year including Art in Florence, Italy; Bio-geology in Belize; and Theatre in Scotland.

For additional information on the International Studies Programs contact Marcy Vozzella at mvozzella@necc.mass.edu or 978-556-3326.