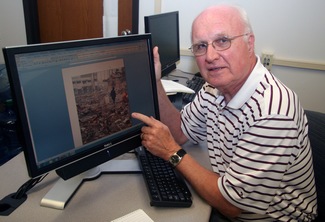 When professor emeritus Gerry Morin left to spend his 20th summer in Japan he could never have imagined the devastation he would witness on a sunny Saturday in July in an earthquake and tsunami ravaged section of that country.

Morin, who for two decades has taught at a summer camp at The American School in Japan in Tokyo, joined a group of 58 volunteers who travelled to the city of Ishinomaki in the northeastern coastal region of Japan to join the ongoing relief efforts in an area devastated by the March 11 natural disaster.

He, and the other summer camp teachers, counselors, and staff, filled two busses for the seven- hour ride from Tokyo to Ishinomaki. Outfitted with masks, shovels, wheel barrels, and bags, they spent six hours clearing storm drains of foul sludge. They bagged the sludge and stacked the bags. They then had a seven-hour return trip to Tokyo.

Even though Morin had seen the devastation numerous times on the televised evening news, he said, he wasn’t prepared for the eerie quiet set to a back drop of twisted metal and rubble as far as the eye could see. There were vestiges everywhere, he said, of where life used to exist including a school where half the faculty and students were swept away.

“We had the opportunity to provide a day of relief work for the survivors of that disaster and an opportunity to see what has been accomplished since ocean waves and fires destroyed a major section of that Japanese community. Although four and a half months have passed and evidence of the rebuilding process can be seen in some areas, the destruction is so monumental in scale, it will likely take many years to complete the task,” Morin said. “I was reminded, upon entering the coastal area of the city of Ishinomaki, of the observation made by a U.S. Marine officer upon entering the city of Nagasaki at the end of World War II – ‘It was like walking into a tomb’. This once-crowded section of the city was smashed into bits by the power of ocean waves or was incinerated by the fires that accompanied the earthquake and tsunami.  Clean-up efforts have barely begun in this area. Although there are acres of fragments of human habitation, signs of life have disappeared. The quiet that one experiences in lingering in this area is truly unsettling.”

Although retired, Gerry Morin continues to teach courses such as Modern China & Japan and World Civilization I and II in the Global Studies Department at Northern Essex.