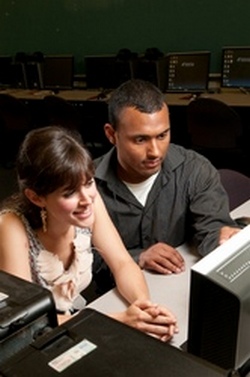 The college math center has helped students like Maria Matrakas and Abraham Batista succeed in math.

Northern Essex Community College has been recognized as a leader in the national student completion movement by Achieving the Dream, a national nonprofit. Northern Essex is one of 23 institutions designated as a 2011 Leader College for demonstrating sustained improvement and accomplishments on key student achievement indicators.

Northern Essex has been participating in Achieving the Dream, a national effort to close the gaps in student success, particularly among minority and low-income students, for the past four years.

Funding and support from Achieving the Dream has allowed Northern Essex to carefully review and measure current practices and develop new initiatives to help improve student outcomes such as retention and graduation rates.

As a result of its participation in Achieving the Dream, the college has created math tutoring centers in Haverhill and Lawrence; introduced supplemental instructors in challenging courses; developed a College Success skills course; expanded and improved academic advising services; and made several new policy changes with an eye toward student success.

“These efforts are already showing results,” says Dr. Lane A. Glenn, president of Northern Essex.  As one example, Glenn sites the 25* increase in students who successfully completed Basic Algebra II, a developmental course, and then College Algebra or College Algebra & Trigonometry (college level courses).  The success rate rose from 49* in 2006/07 to 64* in 2009/10.

A focus on student success is important, says Glenn, because the United States is falling behind other countries on important measurements such as the number of adults with college degrees.

“Right now, three quarters of the fastest growing occupations require more than a high school diploma.  And yet, less than 50 percent of working-age adults living in Massachusetts have at least a two-year degree.  That’s why Northern Essex has made improving student outcomes, both course retention and graduation rates, its college-wide priority.”

This is the third year that Achieving the Dream has recognized Leader Colleges.
“The work of improving student success is very difficult, critically important, and urgent,” said Achieving the Dream President & CEO William Trueheart. “Northern Essex Community College has carefully analyzed student outcomes evidence and has implemented sustained positive student-centered changes.  They deserve enormous recognition for their focus on equity and excellence and for their extraordinary contributions to their communities and our nation.”

Conceived in 2004 as a national initiative by Lumina Foundation for Education and eight national partner organizations, Achieving the Dream has evolved into an independent nonprofit working with 160 institutions in 30 states and the District of Columbia, helping 3.5 million students. Achieving the Dream is focused on creating a “culture of evidence” on community college campuses in which data collection and analysis drive efforts to identify problems that prevent students from succeeding—particularly low-income students and students of color—and develop programs to help students stay in school and receive a certificate or diploma or transfer to a four-year institution.