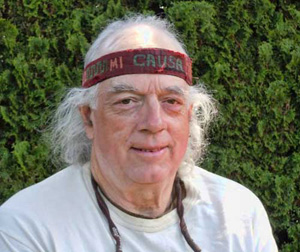 S. Brian Willson, a prominent Vietnam veteran turned peace activist and former Massachusetts resident, will appear Thursday, Oct. 20, at Northern Essex Community College, Bldg E, Room 155, in honor of National Day on Writing, to talk about and read from his psycho-historical memoir, “Blood on the Tracks: The Life and Times of S. Brian Willson”. The event takes place from noon to 1:30 p.m.

Willson, who lost both legs below the knee in 1987 when he was run over by a US Navy munitions train at the Concord, California Naval Weapons Station, kicked off his book tour by cycling from Portland, Oregon to San Francisco on his three-wheeled, hand-powered recumbent cycle. The author said he wanted to demonstrate a mode of personal transportation that reduces dependence upon fossil fuels.

Brian Willson’s long, rich history includes experiences in the Boston area and Western Massachusetts in the 1980s. He served as legislative aide to State Senator Jack Backman (Brookline), working on prison, mental health, and veterans’ issues; he was a worker-owner of New England Country Dairy in Greenfield; he directed the Western Massachusetts Agent Orange Information Project and, later, the Vietnam Veterans Outreach Center in Greenfield. He also co-founded the Veterans Education Project in Amherst.

In 1986, Willson was one of four veterans who staged a 47-day, water-only fast on the steps of the US Capitol in Washington, DC in response to continued funding of Reagan’s Contra terrorist wars in Central America. One year later, on September 1, 1987, he was again thrust into the public eye when he was run over and nearly killed by an accelerating US Navy train while engaging in a well publicized, nonviolent blockade in protest of weapons shipments to El Salvador. “My own government labeled me a terrorist and attempted to murder me,” says Willson. “My story is strongly relevant for activists today in this climate of an unending ‘war on terror.'”

For more information about Brian Willson’s book and upcoming cycling tour, visit his book tour blog at bloodonthetracks.info, or look for his Blood on the Tracks book page on Facebook and book and author pages at pmpress.org.