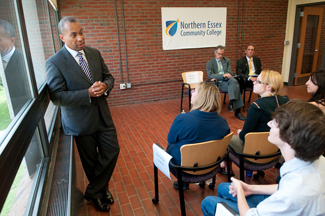 Calling the NECC faculty and staff “the most supportive people I’ve ever met”, Andy Robinson of Merrimac,  a liberal arts major, asked the governor about funding for community colleges, emphasizing the role they play in preparing local residents for careers.  The governor responded by talking about the importance of building relationships between community colleges and employers.

After meeting with students, President Lane took the Governor on a tour of the campus including stops at the Behrakis One Stop Student Center to see the college’s new academic advising program and the Science Building to visit labs that were created for the college’s new associate degree in lab science program.

The Governor’s visit to campus came one week after he announced a new competitive grant program—The Performance Incentive Fund (PIF)—which included $135,053 to fund a newly renovated Student Success Center on the Lawrence Campus and provide retention programs along with an early alert system to identify struggling students and implement planned interventions.