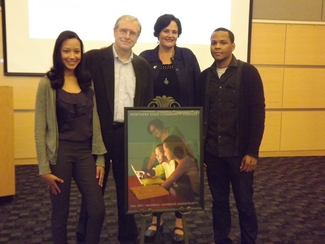 Two Northern Essex Community College students and one NECC professor will now go down in history as the faces representing the college’s first 50 years.

On Wednesday, October 12, Hidy shared his experiences designing the poster with students, faculty colleagues, and interested members of the community in a presentation titled “Celebrating 50 Years in One Poster.”

In addition to designing three U.S. postage stamps, Hidy, a resident of Merrimac, has designed commemorative posters for colleges and universities across the country including Wellesley College, Yale University, and The George Washington University.

His first step is always to form a committee of people who can provide direction to the project and help develop themes and brainstorm images.

A committee of Northern Essex faculty and staff agreed that the image should celebrate human beings directly, rather than just symbols; emphasize the relationship between a teacher and a student; and show the college’s diversity since, according to Hidy, “this is one of the features of our campus of which we are most proud.”  The group also decided on three symbols that should be included in the poster: light, a computer, and a book.

The end result is a beautifully lit and colored poster design featuring two students, Perez and Lara, working on a computer, with a book open to the side, with guidance from Professor Schade.

The artwork came from a photo taken by Hidy who then added the color using Adobe photo shop.  Called Penumbra, the type used in the poster was designed by Hidy in 1994 for Adobe Systems.

Lance Hidy became active as an artist while growing up in Portland, Oregon. He sharpened his skills in art and design at Yale University from 1964 to 1968 and later studied privately with Leonard Baskin. Hidy was co-founder of David R. Godine, Publisher in 1969, before starting his own design firm in 1973. His commercial and fine art work covers a broad range from book design, posters, photography, type design, and illustration.

He was the art director of Harvard Business Review, and is the designer for books and apps for the Ansel Adams Trust. In addition to teaching and running his design and illustration studio, Hidy has lectured and written on design history.  His poster clients have included The George Washington University, Yale University, Wellesley College, Columbia University, the Library of Congress, and the universities of Maryland and Delaware. His fine art work is represented locally by Chameleon in Newburyport. In addition, he is working on a book about the illustrious fly-fishing career of his father, Vernon S. ‘Pete’ Hidy.

Suitable for framing, the 18×24-inch posters are available for $10 in the following locations:

Proceeds benefit the NECC Fund which provides much needed scholarship awards to students, program grants to faculty and staff, and support for the college’s endowment.