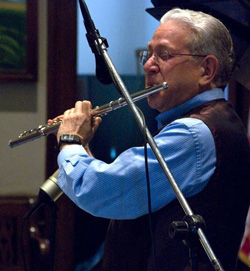 The first of three Essex Chamber Music Players (ECMP) concerts, celebrating the 50th anniversary of Northern Essex Community College and featuring music written for the occasion, will be held Sunday, Oct. 23 at 2 p.m. in the Hartleb Technology Center on the Haverhill Campus, 100 Elliott St.

Past ECMP composers and new composers have created works that are short—three minutes or less—to celebrate the college’s 50 years. NECC alumni and students were also invited to create works for the performance.

The October concert will feature the World Premieres of Fanfares for the 50th Anniversary of Northern Essex Community College by Stephen Feigenbaum: Spread the News; Michael G. Finegold: Fanfare in Bb and Variation (based on the Bill Winiker Orchestra Fanfare); Donald Krishnaswami: Anniversary Fanfare; Erik Lindgren: 50 Years of Excellence; Kate Sullivan: Fanfare in the Key of NECC including Roussel, Trio for Flute, Viola and Cello, Op. 40 and Beethoven’s Duo in E Flat for Viola and Cello, woO 32 ‘Eyeglass’; and David Bennett Thomas: Tale for Flute, Viola and Cello (World Premiere).

General admission is $15, and $10 for seniors, $5 for students, and free for Northern Essex students with college ID.
Additional concerts in the series will include a Feb. 19 piano recital featuring David Alan Pihl performing new and treasured works and a March 25 concert featuring the Essex Chamber Music Players performing works for flute, piano, and cello that use the number 50, for example 50 measures, 50 beats at any tempo
In residence at Northern Essex Community College, the Essex Chamber Music Players (ECMP) under the Artistic Direction of Michael Finegold is devoted to the creation and presentation of new classical music along with great musical treasures of the past. Founded in 1999, the group’s motto is Music for the Twenty-first Century: Treasures of the Past, New Music Premieres.