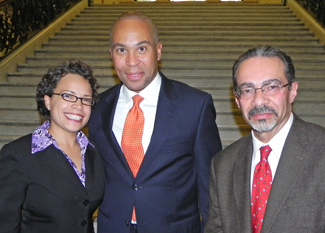 The presentation, held at the Massachusetts Statehouse, was in dual celebration of Hispanic Heritage Month and Education Month.

“It a great honor. It feels good to be recognized after so many years of working for the Hispanic community,” according to Santiago who is a resident of Methuen.

Santiago, 57, teaches both sociology and social welfare at both the Haverhill and Lawrence campuses. He also serves as the director of the Institute for Community Workforce Development at NECC.

“Dr. Jorge Santiago is a gifted teacher and we are extraordinarily fortunate to have him teaching at Northern Essex,” said Northern Essex president Lane Glenn.

Santiago is currently focusing his research and writing on the issues of workforce development, welfare reform, and the changing role of community colleges, with particular emphasis on communities of color and Latinos. Dr. Santiago has just completed a major research project as the Principal Investigator and Senior Co-Author in which over 55* of Latino businesses were surveyed in Lawrence, Massachusetts, a city which maintains the second highest concentration of Dominican immigrants in the United States of America.

Dr. Santiago graduated from the University of Vermont with a bachelor’s degree in sociology. He earned both a master’s and doctoral degree in applied community sociology from Boston University.

Born and raised in the tenements and public housing projects of New York City’s lower East Side, Santiago attended New York City’s public schools. His parents moved from Puerto Rico to New York during the 1940s.

Santiago is proud of his Hispanic heritage. He says he has the unique ability to view issues from two perspectives coming from the streets of New York as well as academia.

For additional information contact Dr. Santiago at 978-556-3304 or jsantiago@necc.mass.edu