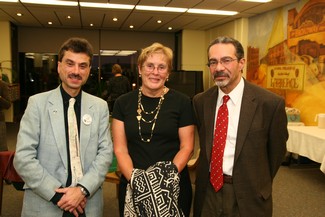 In celebration of Northern Essex Community College’s 50th anniversary, the White Fund Enlightenment Series presented a panel discussion on Thursday, October 6 exploring the college’s 40-year history in Lawrence. Titled “Let’s Chat: Northern Essex Community College Grows Up in Lawrence,” the program covered the historical evolution of the college’s Lawrence Campus from the early days, when classes were throughout the city in any available space, including church basements, to today, when the college has four sites in Lawrence and ambitious plans for expansion.

Richard Padova, NECC alumnus and current history, government, and geography professor, was one of the three panelists. He was joined by Katharine “Kathy” Rodger, retired dean of the Lawrence Campus, and Jorge Santiago, NECC professor and director of the Institute for Community and Workforce Development at NECC.

Padova started the presentation by giving a brief overview of the history of 45 Franklin St., which is the site of the college’s Dimitry Building. According to Padova, tenements located on the site were replaced by a supermarket in 1964 and, in 1981, the Prudential Insurance Company came in, tore down the supermarket, and constructed the building which still stands today. That building was donated to the Commonwealth for use by the college by the Prudential Insurance Company in 1991 and for the past 20 years the college has taught classes there.

Padova also detailed Lawrence’s history as an immigrant city, beginning in the 1840’s with the Irish, the first immigrant group to come to the city. “The Irish were followed by the Germans, Scots, English, French Canadians, Italians, Greeks, Russians, Poles, all had their own enclaves in the city with their church at its center.”

Santiago followed Padova’s presentation, focusing on the history of the most recent immigrant group in the city: Latinos. Santiago was working for then Massachusetts Governor Michael Dukakis when the Lawrence riots occurred in 1984. He was dispatched by the Governor to find out what was happening in the city and a short time later was named executive director of Centro Panamericano, a social agency in the city which he headed for 13 years.

The Lawrence riots were the result of a “disconnect between city government and its leaders and the needs of the Latino community”, according to Santiago.

Over the years, the college “worked hard to bridge the gap but no one knew how wide the gap was and how much work needed to be done.”

In 1996, Santiago was hired by Northern Essex President David Hartleb to help “convince people at the college that change was needed.”

“The best thing we can do is to help Latinos achieve their academic dreams,” said Santiago. “The more Latinos who realize their dreams, the better.”

Kathy Rodger, dean of the campus, who was the face of the college in Lawrence from 1985 to 2002 when she retired, shared insight into the college’s history during her tenure. After the Lawrence riots, then Northern Essex President John R. Dimitry pledged his support for the city, said Rodger, saying “the sky is the limit.” The Lawrence Education Employment Project (LEEP) was born targeting the needs of unemployed or underemployed Lawrencians. The program focused on English as a Second Language, two tracks (English and Spanish) of prevocational basic skills for adults who couldn’t read or write; and training programs in fields such as welding, electronics, and machinery. In the first two months, 487 people received much-needed services.

After the college received the gift of the building on 45 Franklin St. from the Prudential Insurance Company, President Dimitry made the controversial decision to move some of the college’s most popular programs to Lawrence, including all healthcare programs, paralegal studies, and criminal justice. “President Dimitry wanted to be sure that the Lawrence Campus was a first class campus, equal to Haverhill,” explained Rodger.

After the three panelists had covered the history of the college in Lawrence, Mary Ellen Ashley, executive vice president of the college, shared plans for expansion in the city. Since the Dimtiry Building opened in 1991, the college has grown to include NECC Riverwalk on Merrimack St., the Louise Haffner Fournier Education Center on Amesbury St., and the new iHealth Building, also on Franklin St.

The college is currently building the Ibrahim El Hefni Allied Health & Technology Center which is scheduled to open in fall of 2013. Northern Essex also recently purchased the Registry of Deeds with plans to establish a park/green space that will clean up the area, make it safer and more attractive, and provide a pedestrian connection between the Allied Health and Technology Center and the Fournier Education Center on Amesbury St. “We want to create a true urban campus,” said Ashley. “By 2014, we anticipate having 3800 students in Lawrence, a 1000 increase over the 2800 who are studying in the city today.”

Northern Essex is celebrating its 50th anniversary with events that will be held throughout the year including this event. For additional information, visit the website.