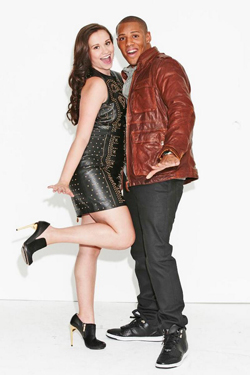 Northern Essex Community College student Jorge Martinez of Lawrence is featured in the November issue of Seventeen Magazine as the winner of their “Best Boyfriend” competition.
Martinez, a 2010 Pentucket Regional High School graduate, is in his second year at Northern Essex and is majoring in Psychology. Martinez’s girlfriend, Kate Murphy of Merrimac, entered him into the “Best Boyfriend” contest last May and Martinez was notified in July that he had won the title of being “The Rock” in their relationship.

In her nomination, Murphy shared how supportive Martinez was when she learned her father had cancer last year. When interviewed by the magazine, Martinez explained that the feelings were mutual. “I do anything I can to support Kate because she supports me, too,” says Jorge. No one in my family every talked to me about college, but Kate took me to look at schools, fill out my applications, and register for classes.”

“It was pretty awesome to have won,” said Martinez. He and his girlfriend were invited to a professional photo shoot in New York City, where 900 photos were taken for the magazine. Martinez and his girlfriend were dressed in designer clothes for the shoot and had the opportunity to meet well known photographers and models, and the staff of Seventeen Magazine.

Martinez’s photo shoot can be seen in the November 2011 edition of Seventeen Magazine which is available now.