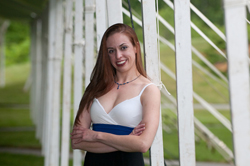 Tracy DiJulia, a 2010 graduate with an associate degree in General Studies, Dance Option, was one of a panel of successful NECC graduates who shared their stories with students.

Four successful NECC alumni proved that you can start at Northern Essex and go anywhere by sharing their stories with current students as part of an alumni panel hosted by the Communication Arts Department.

Amy Callahan, chair of the communications arts department, invited graduates from programs in the department, which include dance, music, journalism/communication, and theater, to speak with current students on Monday, November 21.

Lindsey Bombard, Liberal Arts, Theater Option, 2007
After graduating from Northern Essex, Bombard transferred to Fitchburg State College, receiving a bachelor’s degree in theater in 2009. While a student at FSC, she received a Kennedy Center American College Theater Festival nomination for the role of Harriet in Thornton Wilder’s “Pullman Car Hiawatha”. Bombard has worked as a director, choreographer, stage manager and performer with several schools and companies, including St. Augustine School of Andover, Amesbury High School, Presentation of Mary Academy, the Amesbury Playhouse and Ghostlight Theatre Company. She began pursuing her Master’s in Theatre Education at Emerson College in 2010.

Tracy DiJulia, General Studies, Dance Option, 2010
DiJulia is a successful choreographer and dance instructor who works in Massachusetts and New Hampshire. While a student at Northern Essex, her choreography was selected twice to be performed by the American College Dance Festival. She also participated in several of the Top Notch Theater’s productions as a choreographer and actor.

Allan Mayo, Liberal Arts, Theater Option
A member of the Actor’s Equity Association, Mayo works as a professional actor throughout Boston and New England. He was the recipient of the 2006 KCACTF Region I Irene Ryan Acting Scholarship and won the VASTA Award for Vocal Excellence in Performance at the Kennedy Center in Washington DC. Mayo received a bachelor’s of fine arts in theater performance from Salem State College in 2007.

David Willis, Liberal Arts, Journalism/Communication Option, 2004
After graduating from Salem State College in 2007, Willis was hired as a full-time sports reporter for the Eagle Tribune, where he started as an intern while a student at Northern Essex. He is currently covering a variety of stories from high school sports to the NFL and the NBA. He is also a staff contributor to Boston Baseball Magazine, specializing in covering Boston Red Sox minor league prospects, and is the sports editor for the Andover Townsman. Willis was editor of the NECC Observer for three semesters while a student at NECC.