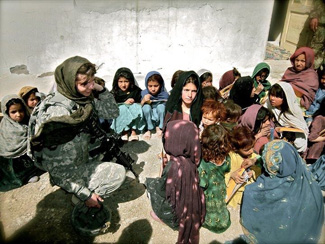 Before Specialist Jillian Hoiseth was deployed to Afghanistan with her Army Reserve unit, the 24-year-old Newburyport native was pretty sure she wanted to become a teacher. By the time she returned home she was certain of it. Now she is enrolled at Northern Essex to make that happen.

After arriving in Afghanistan, Jillian was initially a one-woman unit who recruited other female soldiers to create a “female engagement team”. This team focused on educating Afghan women on their constitutional rights as well as getting them and their children educated. Her group was responsible for holding the first “shura” or women’s meeting in 34 years in the Urgun District. More than 400 women attended the shura when only 20 were expected.

After working with these women and their children, Jillian knew she found her calling. What her team discovered was that the female villagers and children, as well as many of the men, were illiterate which made them unemployable. In addition to delivering snacks, winter clothes, hygiene kits, and backpacks full of books to the children – particularly the girls, they also established a sewing program as a means for the women to make money.

With materials donated from other organizations, her team helped build two prefab schools for girls and implement a radio literacy program which supplied children with books and a handheld radio. The local radio station arranged for someone to read the books over the airwaves so the children could read along.

Jillian and her team’s accomplishments were closely followed the children in her mother’s classroom at the Bresnahan School in Newburyport. Upon her return Jillian visited the classroom. Her visit was the culmination of a larger unit taught by her mother. Students wrote letters to soldiers as part of their English class and practiced their mathematics by evenly distributing items in care packages for the soldiers.

A 2006 Newburyport High School graduate, Jillian could never have imagined she could impact so many lives or that somany lives could impact her life. After high school graduation Jillian attended Stephens College where she studied equestrian science. In 2008, she followed in her father’s boot steps and joined the reserves. In 2009 she completed her basic training. While waiting to be deployed she lived with a relative in California and worked as an aid in a special needs classroom. It was there that she started to think maybe her future was with children and not horses.

While serving in Afghanistan, Jillian enrolled in college courses online through a California community college. When she returned to the states she transferred in 18 credit hours to Northern Essex. She hopes to transfer to a four-year college this summer to begin working toward her bachelor’s degree and then earn a master’s degree in education.

“I like it here,” she says. I love all my classes. They are definitely challenging. It has a small school feel where the professors are interested in the students and their goals.”