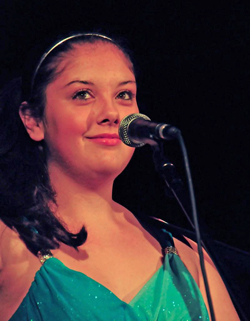 Northern Essex Community College student Amanda McCarthy of Londonderry, NH won “Most Confident/Enthusiastic Performer” at “Music On & Up- 19 and Under Showcase” competition at the Hard Rock Café in Boston earlier this month.

McCarthy, 18-years old and a 2011Londonderry High School graduate, is a music major at Northern Essex who sings and plays both the guitar and piano. She recently performed in the college’s talent show.

“To win an award for being the most confident performer is personally a huge milestone for me because it seems that not too long ago it was the exact opposite,” said McCarthy.  “I used to get very nervous while performing and with experience, I have become more comfortable on stage.”

McCarthy has written over 100 original songs and has performed at numerous venues including Six Flags New England, the Massachusetts State House, the Sad Café, and Ground Zero.

Since she started performing at the age of 12, Amanda has played at numerous venues including Boston’s Hard Rock Cafe, Six Flags New England, Massachusetts State House, The Sad Cafe, Ground Zero, and more.

After graduating from NECC, her goal is to transfer to the Berklee College of Music.

In order to be considered for the showcase, each performer had to submit a video to be reviewed by a panel of judges. At the Hard Rock Café in Boston, McCarthy performed two songs in front of the judges.

Northern Essex offers an associate degree in music and a certificate in music technology.  Students have the opportunity to perform in the Chorus & Music Club or with one of the college’s music ensembles.

To learn more about Amanda McCarthy or to hear her music visit www.facebook.com/AmandaMcCarthyMusic