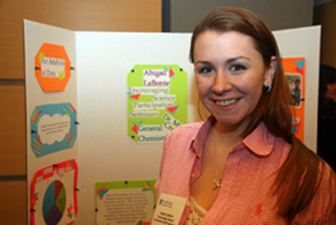 A business that repairs cell phones and laptop screens, a lending library full of high-end board games, and a yoga practice for individuals struggling with addiction are just three of the nine projects recently launched by Northern Essex Community College Campus Catalyst teams, comprised of NECC entrepreneurial students.  The new businesses were recently featured at a Campus Catalyst Showcase at Northern Essex.

These teams received funding from the Merrimack Valley Sandbox Initiative’s Campus Catalyst program which promotes entrepreneurship by college students.  Funded by the Deshpande Foundation, the goal of this program is to provide students an opportunity to discover their passion, develop project management skills, and understand that entrepreneurship is a career option for them to undertake.

The Deshpande Foundation recently launched the Merrimack Valley Sandbox to develop and enhance an innovation ecosystem in the cities of Lowell, Lawrence and Haverhill.  The Sandbox is based upon the success of the foundation’s initiatives at MIT and in Northwest Karnataka, India.

The Sandbox operates out of the new Merrimack Valley Center for Innovation and Entrepreneurship at UMass Lowell, which coordinates activities between the university and colleges, local non-profits and the business community. Colleges involved in the partnership include UMass Lowell, Merrimack College, Middlesex Community College, and NECC.

A total of 45 entrepreneurial programs, from all the colleges, were accepted in the first stage. Each received $500 to use on their project. The teams are invited to apply to participate in the second stage of the Campus Catalyst which grants up to $750 to help fund the expansion or evolution of the project.

NECC students Jason Spinney of Amesbury, David Bowie of Plaistow, NH, and Abigail Howe LaBonte of Newburyport, are all board game enthusiasts. They saw a need for a lending library where these high end games would be readily available to other NECC college students. The result is The Game Librarians.  Their project was named the most likely to succeed at the Campus Catalyst Showcase held earlier this month

NECC students May Henderson and Jared Henderson, both of Danville, NH, created team Ahimsa. They focus on individuals struggling with addiction. Through a yoga and meditation practice they encourage these individuals to care for themselves.

NECC student Keaton Van Thof of Merrimac has already repaired more than 100 phones with cracked screens or damaged digitizers. He has trained Rob Putnam of North Andover, also an NECC student, who assists in the repairs. Together they make up iFix.

Wave of Inspiration: a training for students to use the assistive technology beginning with the Livescribe Smart Pen. Team members include Sarah Melanson of Haverhill, Martha Squiers of Haverhill, Justin Melo of Methuen, and Michael Lowell of Amesbury.

ESP Seminars (Encouraging Science Participation): a series of hands on interactive science workshops to get students on the NECC campus excited about science, led by Andrison Vargas of Haverhill, Abigail Labonte of Newburyport, Jason Spinney of Amesbury, Rachel White of Boston, and Meagan Cleary of Windham, NH.

The Mirror Box: a website that showcases photographs from organizations and individuals whose work depicts, interprets, shares, and visualizes many of the social and economic issues facing the local, regional, and global community, Dawson Lazdowski of Newburyport, Nicole Piatti of Haverhill.

The Butterfly Affect: a support group for women who have been sexually exploited, Tanee Hobson of Methuen and Valerie Gyang of Haverhill.  This team took the award for “Most Entrepreneurial Spirit” at the Campus Catalyst Showcase held earlier this month.

Pada Health & Wellness: Series of workshops to promote health, wellness, and relaxation for inner-city girls ages 12 to 15, Lisa Pasho of Andover, Angela Warren of Haverhill, and Celines Colon of Lawrence.