Bradford’s Greenleaf School will be Recognized 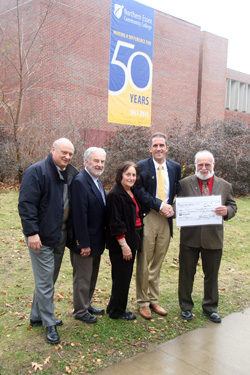 The Northern Essex Community College Retirees’ Association recently donated $760 to the college, in recognition of its 50th anniversary, to fund a plaque to be placed on the grounds of the Greenleaf Elementary School in Bradford which was the original site of the college.

The plaque will be mounted on a boulder selected from the Elliott Street campus. It will be moved to the Greenleaf School on Chadwick Street next year and unveiled during a ceremony on April 24, 2012.

A dedication ceremony will take place at the Greenleaf School on Tuesday, April 24 at 11 a.m.  The public is invited.

Northern Essex opened its doors with just 181students in 1961. For 10 years it was located in the Greenleaf School on Chadwick Street in Bradford. Eventually it moved to the old Haverhill High School which is now City Hall, and Elliott Street became its permanent home in 1971. Over the years it has opened several campuses in Lawrence including the Dimitry Building on Franklin Street, the Haffner Fournier Education Center on Amesbury Street, NECC Riverwalk on Merrimack Street and iHealth, also on Franklin St.

The college is celebrating its 50th anniversary with a year-long series of events, culminating with a gala on Friday, April 27.