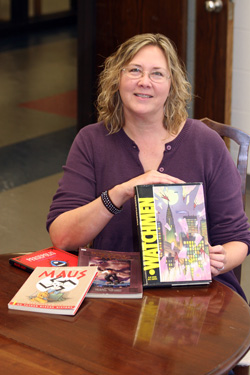 After Ginger Hurajt’s brother loaned her his collection of “Elf Quest,” a cult comics book series, she developed a new appreciation for the quiet genre of graphic novels.

The Northern Essex Community College professor and Haverhill resident is bringing her affection for the graphic novel into the classroom in January when she offers a special topics English course titled “The Graphic Novel”.

The graphic novel, by definition, is a sequential narrative told in images and text. Some might even refer to it as a “long comic book” says Hurajt, but typically it is anything but light reading often associated with comics.

While the story may be told with the art and text with a comic-book-like style, the subject matter is often very serious in nature. Take for example Art Spiegelman’s “Maus,” which is a biography of his father, a Polish Jew and Holocaust survivor.

Cave paintings, the tapestries of the Middle Ages, and even The Almanac can be viewed as precursors to today’s graphic novels. While the graphic novel has roots in simple woodcut images published in the 1920s and 1930s, it was forced underground during the mid-sixties because of a growing social concern over the content of horror and crime comics aimed at children.

In 1978, Marvel Comics produced the first original mass-market trade paperback graphic novel, “The Silver Surfer” by Stan Lee and Jack Kirby. 1985 saw the release of DC Comics’ “The Watchmen” by Alan Moore and Dave Gibbons. “The Watchmen” remains one of the most best-selling graphic novels of all time, continuing to make top ten sales lists over 20 years later.

Eventually, the genre became mainstream. Today it is considered legitimate literature. Sometimes the author and the artist are the same. In other titles, the author collaborates with an artist.

Today bookstores and libraries have shelves, if not sections, dedicated to the graphic novel. It is not unusual for students in English Composition classes to find “Persepolis,” a memoir of a young girl growing up in Iran, or another graphic novel, on the class syllabus.

“Students often say, ‘I can’t believe my teacher is requiring that I read a comic book.,” says Hurajt. “It’s a different kind of reading experience. It appeals to visual learners. They are fast reads. By reading both art and text the reader develops another critical reading skill. You really have to read a graphic novel to appreciate it. They are the same as any great literature. It they are good then the reader can relate to the character and situations.”

The course will be offered Mondays, Wednesdays and Fridays at 11 a.m. on the Haverhill campus and the community can enroll.

For more information, call 978-556-3700 or visit the college’s website www.necc.mass.edu.
For additional information on this course contact Ginger Hurajt at ghurajt@necc.mass.edu