The frigid temperatures did not discourage a crowd of local officials, business people, Northern Essex Community College trustees and foundation members, and residents of the Merrimack Valley, who gathered at the corner of Common and Hampshire Streets in Lawrence Tuesday morning to witness the first strikes taken in the process of demolishing the InTown Mall on Common Street. The dilapidated three-story building, which was built 50 years ago to house retail businesses on the first floor and a parking lot on the second and third floors, is being torn down to make way for the Northern Essex Community College El-Hefni Health & Technology Center.

Lane Glenn, president of Northern Essex, made some brief remarks right before a bright yellow crane knocked rows of vertical metal struts from the top two floors of the building to the ground, beginning the demolition process which is expected to take several weeks.

“This is an exciting day for the college and the city of Lawrence and its residents. And we would not be standing here today celebrating this milestone without the hard work and strong support of many people who care deeply about this city.

When completed in the fall of 2013, the $27.4 million El Hefni Health & Technology Center will house the majority of the college’s 17 health care certificates and associate degrees.

The 44,000 foot facility will feature a Health Education Simulation Center, where health care students will receive hands-on experience in simulated environments such as a hospital intensive care unit and operating room, an ambulance, and a doctor’s office. The building will also include classrooms and computer labs and a Career Planning and Advising Center where students will receive academic and career counseling. 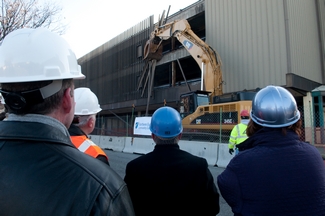 “With this new facility, we will have the space to expand our health care programs, in collaboration with area employers, creating new programs in emerging fields,” said Glenn.

Lawrence Mayor William Lantigua was on hand for the demolition ceremony, saying “it can be sad when an older building is torn down, but not today. I am very proud this is about to happen.”

State Senator Barry Finegold called the El-Hefni Health & Technology Center “a job creator.” “We’re hearing a lot about jobs,” he said. “This new building represents opportunity for people to get the skills they need to get jobs.”

Architects Miller Dyer Spears—who also designed the Hartleb Technology Center on the college’s Haverhill Campus—have completed designs for the building. It is a silver LEED project that takes full advantage of the sun as a source of energy.

When completed, the building—a three-story contemporary structure featuring sleek silver accents—will be a welcome addition to downtown Lawrence. Inside the center, local residents will prepare for careers in high demand health fields such as respiratory care, nursing, and sleep technology.

The El-Hefni Health & Technology Center is part of a larger plan for growth in Lawrence, according to Glenn. In recent months, Northern Essex has renovated its Louise Haffner Fournier Education Center on Amesbury Street, adding a new chemistry lab for students studying health and sciences, and opened a leased facility on Franklin Street to house iHealth@NECC. NECC Riverwalk on Merrimack Street opened in the fall of 2010. The college also recently purchased the Registry of Deeds Building in Lawrence with plans to create an open green space.

“Northern Essex has had a commitment to this city for more than 40 years, and we intend on expanding that commitment and developing a comprehensive urban campus right here, working with the city, area business and organizations, and anyone else who shares our vision,” said Glenn. “When completed, Lawrence will truly be a college town.”

“Enrollments in the city have been exploding,” said Glenn, who cites a 19* enrollment growth in the city in five years.

Students with a Lawrence zip code now represent nearly 25 percent of the college’s more than 7,000 students.