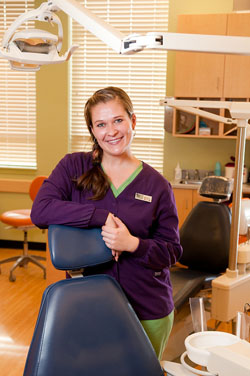 Merrill Thompson had a Bachelor of Science degree in Business. What she didn’t have was a career or a job.  Northern Essex helped her find both.

A 2002 graduate of Pentucket High School, the West Newbury resident attended Framingham State College and earned her college degree. Unfortunately, by the time she graduated, the recession had affected the job market and she found it impossible to find a job without work experience. Luckily, she says, her father owned a butcher shop and she worked for him.

But still, she was anxious to break out and make her own way. She knew this would probably involve returning to school so she started exploring her options.

A friend teased Merrill about her amusing obsession with teeth and oral care and suggested she look into a dental care program. With Northern Essex just down the road, Merrill took her friends advice and explored the dental assisting program. She was intrigued because she could complete the program in a year.

“I already had a four-year degree so I was looking for a program that would put me in the job market quickly,” she says. “I was drawn to dental assisting because I figured it would expose me to how a dental practice operates.”

She was right. Her first practicum was with an orthodontist, Dr. Nelson, in Danvers. Merrill was offered a job almost immediately.

“It was the right move for me,” says the 27-year-old. “I absolutely loved the program. It was an awesome experience. I would tell people that with this economy it is best to pick a field that is specific with strong job prospects. I still receive emails from the program coordinator regarding jobs that are available.”