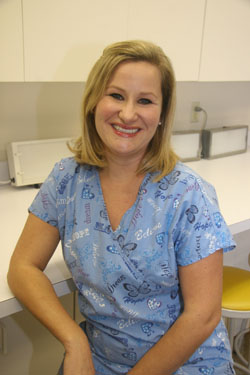 Though she spent nearly her entire career as a successful financial advisor for a large financial institution, the 38-year-old Salem, New Hampshire, resident says she always felt the pull of the medical field.

“At the end of my work day, I never felt like I had made a difference in someone’s life,” says the mother of three (soon to be four).

She sensed she belonged in health care, but was afraid to make the leap until she was laid off. “I knew instantly I wanted to explore the health care field,” she says.

Even though Tina had been dreaming about entering the health care industry since graduating from Haverhill High School in 1991, she wasn’t sure how to begin. So, she took a cue from a nurse who recommended she ease into the field by becoming a phlebotomist.

She embraced the classroom work and as soon as she started her externship knew she found the right career direction.

“Everything about it felt right,” she says. “My externship at Lawrence General Hospital (LGH) gave me the opportunity to see how a hospital works. It gave me invaluable experience,” she says.

Today, Tina works three nights a week as a phlebotomist in the emergency room at LGH. Her exposure to a hospital setting prompted Tina to think about other avenues in health care. She is now enrolled in NECC’s practical nursing certificate program.

“The phlebotomy program was relatively short. It was affordable and gave me a taste of the medical field which was so foreign to me,” she says.