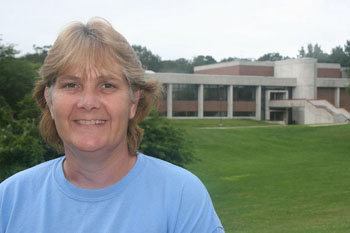 Back in 1985, Lisa didn’t graduate with the rest of her class from Haverhill High School. But two years later, while nearly nine months pregnant with her first son, she earned her GED.

In 1992, after the birth of her second son, she enrolled at Northern Essex in pursuit of that college degree. Less than two semesters later, unable to focus and in some instances retain information, a frustrated Lisa left college.

Though she was successful in securing a number of different positions in manufacturing, and jobs as a TSA agent and mail carrier, she felt college was still out of reach. Unfortunately, a back injury sidelined her job prospects which led to a bout with depression.

Sanborn underwent counseling and during one of those sessions she voiced her disappointment regarding the elusive college degree. The counselor recommended she undergo testing which revealed she had a host of neurological issues including ADD, ADHD, and dyslexia; all of which contributed to her learning issues. “I was relieved to know there was a name for what I had,” she says. “It explains why I have had such a hard time. I have had trouble in school since at least the sixth grade.”

Armed with this new information, she returned to Northern Essex and began working with the college’s Learning accommodations Center. She now has a note-taker and she receives extra time on her tests.

“NECC’s Learning Accommodations Center is helping me earn my college degree,” she says. An illustration major, she plans to graduate with her associate degree in the spring.