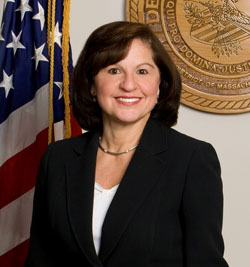 Carmen Ortiz, the first Hispanic and the first woman to represent Massachusetts as United States (U.S.) Attorney, will be the featured speaker at Northern Essex Community College’s White Fund Lecture Series on Friday, February 17 from 8:45 to 10 a.m. at the Lawrence High School/Performing Arts Academy, 70-72 Parish Road, Lawrence. Free and open to the public, Ortiz’s presentation is titled “A Morning with U.S. Attorney Carmen M. Ortiz: Top Priorities of a Federal Prosecutor.”

Ortiz will talk about the role of the federal prosecutor as well as share her personal journey – with a special message for young people about making the right choices at an early age.

Her 45-minute presentation will be followed by a question and answer period moderated by Attorney Magdalena Suarez-Shannon, a member of the NECC criminal justice faculty.

Nominated by President Barack Obama, as the U. S. Attorney for the District of Massachusetts, Ortiz was confirmed by the U.S. Senate in November 2009

As the chief federal law enforcement officer in the state, she supervises the prosecution of all federal crimes and the litigation of all civil matters in which the federal government has an interest.

This past December, Ortiz was named “Bostonian of the Year” by the Boston Globe Magazine. Citing her successful prosecutions of Salvatore DiMasi, former speaker of the Mass House, Diane Wilkerson, former state senator, Chuck Turner, former Boston city councilor, and Tarek Mahenna of Sudbury, the Globe wrote “She has sent an unambiguous message to the Massachusetts political class to behave, ramped up prosecutions of white-collar crime, and built a new civil rights enforcement team. For all of these reasons, she is our Bostonian of the Year.”

Prior to becoming U.S. Attorney, Ortiz was an assistant U.S. attorney in the Economic Crimes Unit of the U.S. Attorney’s Office (Massachusetts), and also served as the grand jury supervisor. In addition to her federal service, Ortiz served as an assistant district attorney in Middlesex County, where she worked for eight years, overseeing the District Court and prosecuting homicides, sexual assaults, robberies and other felony cases.

A native of New York, Ortiz is a graduate of Adelphi University (B.B.A.) and George Washington University Law School (J.D.).

This event is free and open to the public. The White Fund’s purpose is to have a free series of interactive presentations for Lawrence area adults, youth, and children. The audience is encouraged to seek wisdom, cultural enrichment, and intellectual enhancement by attending and participating.

Funded by a generous financial gift from the Honorable Daniel Appleton White, the White Fund Lecture Series has provided cultural conversation featuring well-known lecturers in fields such as history, literature, travel, the arts, and politics. For additional information, call 978-738-7403 or visit the website www.necc.mass.edu/whitefund

Other scheduled White Fund lectures include Sunday, April 22, Dr. Franklin Chang Diaz, NASA astronaut and founder of Ad Astra Rocket Company, who will present “My Personal Journey through the American Dream” at the Lawrence Senior Center, 155 Haverhill St. Lawrence from 2 to 4 p.m..