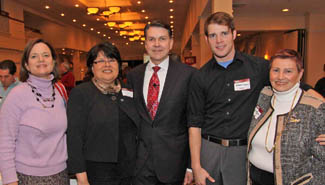 What can you do with an associate degree in business from Northern Essex Community College? How about run a $2 billion dollar company with 37,000 employees.

That’s just what Steve Sweeney, who graduated from Northern Essex in 1974 is doing, as president and CEO of Chartwells, a leading academic food service provider.

On Thursday, January 26, Sweeney was a guest speaker at the Greater Salem Chamber of Commerce’s “Really Big Speaker Event” where he shared his advice for success with the audience, which included students from Northern Essex Community College. In a presentation called “From Dishroom to Boardroom”, Sweeney said “It’s not just finding your passion; it’s the thousand of details around it.”
Growing up in Haverhill, Sweeney claims he was an okay student, earning “B,C’s and the occasional D.”

He found his passion when he was 8 years old and spent the weekend with his aunt and uncle who ran a restaurant at the beach. “I fell in love with the hospitality business,” he says.

He enrolled at Northern Essex after high school and became a straight “A” student, and then earned a hospitality degree from Essex Aggie, again excelling in the classroom. His decision to go to New York City in his 20’s was what he called a “defining moment.” It was there that he became truly motivated to succeed, prompted in part, he jokes, so he could earn enough money to move out of his roach-infested apartment.

At the chamber event, Sweeney shared two top ten lists: words of wisdom that were designed for students or young professionals just getting started, but helpful to anyone with a career.

The first list featured advice for finding a field that’s a good fit and then rising within that field.

Sweeney emphasized the importance of identifying your core competencies. As an example, Sweeney shared his lifelong love of animals. “I wanted to be a vet but I couldn’t,” he says. “Science isn’t my strength and I knew I could never pass chemistry.”

Sweeney’s second top ten list outlined advice for succeeding on the job, including the importance of “I do” over IQ. “Having a good attitude is so important. I’ll take anyone with “I do” over IQ.”

Sweeney has been president of Chartwells for the past 15 years and before that he spent 18 years with FLIK International Corporation, where he was vice president of operations. In 2003, he was the featured speaker at Northern Essex Community College’s Commencement.