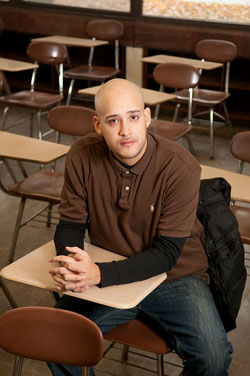 Northern Essex Community College may be a long way from New York City, but it was Alex Then’s first step toward a career in the music industry. His next step is UMass Lowell before he returns to the city of his birth to pursue his dream.

Born and raised in the Bronx to parents from the Dominican Republic, Alex learned English from watching cartoons. Educated mostly in New York, he arrived in Haverhill during his senior year of high school. He attended Haverhill High School where he had to attend summer school before he could graduate.

Admittedly, he says, he was more concerned about his social life than his education or his future. Alex bounced from minimum-wage job to minimum-wage job, enrolling and unenrolling at Northern Essex. He was dogged by financial issues and overwhelmed from helping his single mom parent his much younger brother.

By the fall of 2008 Alex was tired of his discontent. Maturity set in and he enrolled in the business transfer program at NECC. Alex graduated with honors in the spring of 2011 and continued taking classes at Northern Essex even after he enrolled in classes at UMass Lowell through the NECCUM program which allows students to cross enroll at a state college or university while attending a community college. “I wanted to take full advantage of the transfer credits because Northern Essex is so affordable,” Alex said.

He is currently working on a bachelor’s degree in business management with a focus on entrepreneurship. Eventually he hopes to enter the music industry as either a manager or an agent. He already dabbles in music production and thinks that experience would blend nicely with a business degree.