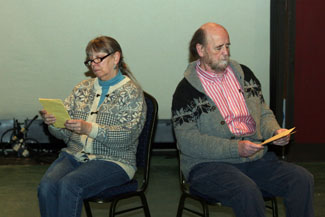 Northern Essex Community College will present “Love Letters” Friday, Feb. 10, and Saturday, Feb. 11, at 7:30 p.m. in the Chester W. Hawrylciw Theater on the third floor of the Spurk Building on the Haverhill campus just in time for Valentine’s Day. The Friday night performance will feature veteran regional actor John Budzyna and his wife NECC professor Deirdre Budzyna of Newburyport. On Saturday night, NECC professors and husband and wife Susan Sanders and Jim Murphy of Hampstead, NH, will take to the stage.

Written in 1989, “Love Letters” is very accessible to audiences, performers, and theater producers. The play simply involves actors reading fictional letters that reveal the correspondence of a man and a woman, from their childhood until their middle age.

Because the lines are meant to be read and not memorized, many famous actors and actresses of have been drawn to these “star-crossed lovers,” sometimes for just a single performance such as Elizabeth Taylor and James Earl Jones who performed together in 2007.

“This is a play, or rather a sort of a play,” said Gurney, “which needs no theater, no lengthy rehearsal, no special set, no memorization of lines and no commitment from its two actors beyond the night of performance. It is designed simply to be read aloud by an actor and an actress of roughly the same age, sitting side by side at a table.”

Tickets to the Northern Essex performance are $20 and available at the door. All proceeds will help support the Top Notch Players’ trip to the Edinburgh Arts Festival in August 2012.

For additional information contact Susan Sanders at ssanders@necc.mass.edu or 978-556-3374.