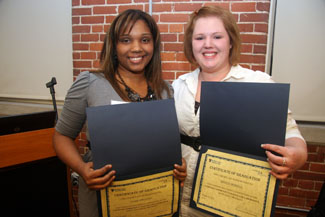 Seven women, who had either previously been homeless or were at risk of becoming homeless, were the first to graduate recently from the COMPASS Community College Collaborative program, designed to train and educate them for entry-level jobs.

At least two of them received job offers along with their diplomas – one working for Sal’s Restaurant and the other as a pre-school teacher for Little Sprouts.

Keynote Speaker Joanne Goldstein, noted that the graduates, having completed the program, which is one of seven offered in six different communities in the state, are …”in a much better position for long-term success”. She said each woman has also served as an important role model to her children. “This program shows what can be done with your hard work and support from the community”.

The project, which will launch its second class this month with 16 participants, is funded by a Transitional Employment grant through the Executive Office of Labor and Workforce Development. The grant program is funded by the Workforce Investment Act and is administered by Commonwealth Corporation.

For 17-weeks these women worked 30 hours a week toward their goal. The first week was orientation followed by four weeks of “Success at School and Work Boot Camp”. Another 12 weeks were dedicated to paid on-the-job training, where they logged at least 100 hours developing soft skills. In the end, they earned vital work experience as well as credit for two college courses.

Wilinsky Hill said the graduation was a culmination of a successful mix of public, private, and nonprofit agencies.

“This program goes to the heart of what we do at Northern Essex Community College,” said NECC President Lane Glenn.

Kristin Morrell, the mother of a four-year-old, who had previous restaurant experience, was a student speaker and told the dozens of family and friends present, that her experience with the program “brought back my love for the restaurant business that I thought I had lost.”

Anais Chiclana, the mother of three young children, said she is anxious to begin working with preschoolers.
Employer partner Susan Leger Ferraro, who was just 17 when she launched Little Sprouts, which now has 14 locations and serves 1600 children, said each of the program’s participants “exceeded our expectations”.