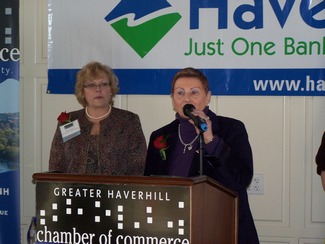 At the Greater Haverhill Chamber’s Annual Business Awards Breakfast, Northern Essex Community College was recognized as the chamber’s business of the year in the education category.

In announcing the award, Diane McDermott, immediate past chairwoman of the board of directors, shared the college’s recognition this year as a leader in the national student completion movement by Achieving the Dream, a national nonprofit. Northern Essex was one of 23 institutions across the country designated as a 2011 Leader College based on its success in improving student course completion and graduation rates.

McDermott also mentioned the college’s close partnerships with the business community and the 95* positive placement rate of its graduates one year after graduation.

At the awards breakfast, the college also picked up a check for $187 from the featured speaker, Massachusetts State Treasurer Steve Grossman, who discovered it, along with thousands of dollars due to Haverhill chamber businesses, in the state’s unfound money.

In his remarks, Grossman said that Massachusetts has a stronger economy than the majority of states due to its human capital. “We have well trained individuals who are coming out of our schools including our community college down the road.”

Jean Poth, vice president of institutional advancement, accepted the award for President Lane Glenn, who was unable to attend.