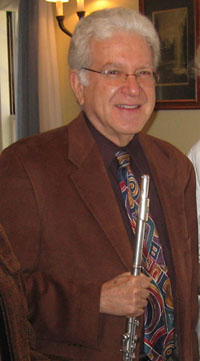 In honor of the college’s 50th, composers and new composers have created brief works using the number 50 including “Shiva’s 50 Steps” by Marc Rossi, “50 + Times Three” by Elliott McKinley, “50/50” by Daniel J. Kennedy, and “Small Mysteries at Fifty Beats Per Minute for NECC at Age Fifty,” by Stephen Peisch.

The program also includes the 1926 French work “Sonata da Camera Op. 48,” by Gabriel Pierne as well as the premiere of the jazz influenced classical “Trio” by Peter Farmer.

An audience question and answer period with composers and players will follow the performances.

Michael Finegold, founder and director of ECMP, says of the pieces “The Rossi work has melodic and rhythmic influences of India. The Kennedy piece, less than a minute long has a “surprise” melody in it that all will recognize. The McKinley has a five-beat ostinato played throughout, yet is a calm but mesmerizing piece featuring a dazzling flute part.”

General admission is $15, and $10 for seniors, $5 for students, and free for Northern Essex students with college ID.

The Essex Chamber Music Players under the Artistic Direction Michael G. Finegold is in residence at NECC.

For additional information on this concert visit www.ecmp.org