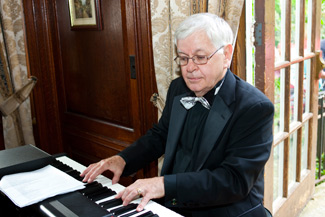 Porter sings and plays music from the 20′s to today. He has performed at Carnegie Hall, Radio City Music Hall, and The Hollywood Bowl and on Johnny Carson’s “Tonight Show.”

“People often enjoy reminiscing and hearing the great songs from the older movies,” Porter said. He gives his audience tribute songs and also does sing-a-longs, trivia questions and sometimes prizes, too.

A Boston-born keyboardist, Porter started playing at the age of seven. In the early 60’s he toured throughout the U.S and Canada with trumpeter Howard McGhee. During this time he recorded two albums for United Artist, his own and one with Howard McGhee. In the 70’s he recorded an album with jazz-rock band Chase that cracked Billboard’s top ten nationally. Since that time he has worked as both a soloist and with his own bands and other bands throughout New England.

Life Long Learning is a program of lectures, study groups, and trips for adults. All programs are open to the public.