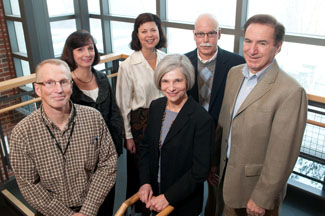 Here is additional information on each of the recipients:
Judith Pollock-Ciampi, of Chelmsford, coordinator of the paralegal studies program, who holds a Bachelor of Arts degree in Psychology from Boston College and a Juris Doctorate Degree from New England School of Law, is a practicing lawyer in the area of corporate and contracts. She began teaching at Northern Essex as an adjunct instructor in 1994. She became a full-time faculty member and the coordinator of the paralegal program in 1999.

Gail Feigenbaum of Andover, coordinator of the Early Childhood Education Program, has been teaching at Northern Essex for 25 years. She holds a bachelor of arts degree from Simmons College and a Master’s in Education from Tufts University.

John Murray of Kittery, ME, department chair cardiopulmonary services, sleep technology & exercise science and sleep technology program director, came to Northern Essex in 2008 with a strong background as a clinician and hospital administrator. Using his skills he developed the fledgling Sleep Technology program into a successful program that is now available almost entirely online and created a fully functional sleep lab on the Lawrence Campus, with donated sleep diagnostic equipment.

He earned an Associate of Science in Respiratory Care from Newbury College, a Bachelor of Science in Healthcare Services – Polysomnography from California College of Health Sciences, and a Master of Public Health from Independence University.
Murray is treasurer/secretary of the Maine Sleep Society.

She holds both a Master of Education degree as well as a Bachelor of Arts degree from the University of Massachusetts.

Jim Sullivan of Stratham, N.H., chair of the Department of Academic Preparation and a professor of mathematics has worked at Northern Essex since 2004 as a professor of Developmental Math. His approach is to combine math and writing. Called “coach” by his students, he focuses on getting students to apply what they are learning instead of memorizing facts and procedures.

He holds a Bachelor of Arts and Master of Art from Boston College. Sullivan has authored two textbooks as well as several articles for professional journals.

Bill Zannini of Salem, N.H., associate professor in the business programs department,
became a full-time faculty member at NECC after a 25-year career in research & development of technology-based products and services. He taught business courses as an adjunct faculty before turning to teaching full time. His first full-time venture was to coordinate the Business Administration department including program reviews for both the transfer and career programs. He developed the entrepreneurship program at NECC, which now includes an annual Business Plan Competition held in April.

The 34th Annual NISOD conference will be held May 27 through May 30 in Austin, Texas.