NECC Chorus will Grow to 50 Members 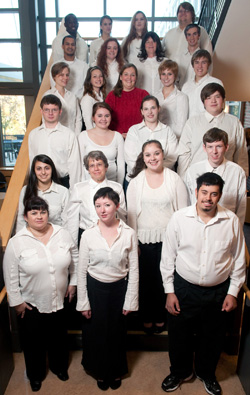 As part of the college’s 50th Anniversary Celebration, Choral Director Alisa Bucchiere is planning a special concert for Sunday, April 29 at 4 p.m.

Bucchiere has gathered a 50-member chorus—including students, alumni, faculty, and staff—which will perform a program selected in honor of the anniversary.

“This is double the size of our regular chorus,” says Bucchiere. “I’ve been having a wonderful time recruiting talented singers from all areas of the college, and this is going to be spectacular event.”

The concert will be held in the David Hartleb Technology Center on the Haverhill Campus, 100 Elliott St.