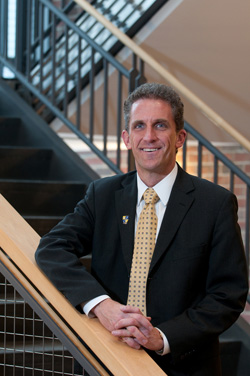 On Monday, April 30 at 11 a.m., Northern Essex Community College will celebrate the Inauguration of Dr. Lane A. Glenn, the fourth president in the 50-year history of the college.

President Glenn’s Inauguration will be held under a tent in the quadrangle on the college’s Haverhill Campus. The Reverend Thomas Bentley, son of Harold Bentley, the founding president of the college, will give the invocation, and former Presidents John R. Dimitry and David F. Hartleb will deliver greetings to the new president.

A resident of Amesbury, Dr. Lane Glenn became president of Northern Essex on July 1, 2011. Prior to his appointment, he served as vice president of academic affairs for five years.

He is focused on student success and is passionate about finding ways to help students achieve their educational goals, especially students who are underprepared for college.

At Northern Essex, he has provided leadership for the college’s involvement in Achieving the Dream, a national effort to help more community college students succeed, with a special focus on students of color and low income students. In the past four years, the college has adopted many new initiatives, including enhanced academic advising, new tutoring resources, a college success skills course, and more, designed to increase retention and graduation rates.

In addition, he expanded the college’s relationships with local high schools and partnered with local employers, such as Raytheon, to develop programs that deliver the skills most needed in the job market.