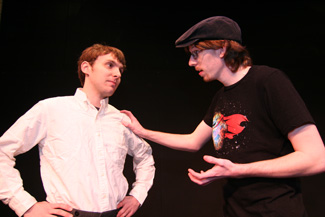 A dozen Northern Essex Community College students will perform an original adaptation of the play “American Gothic; The Poems of Edgar Lee Masters,” on the Haverhill campus this month and in Edinburgh, Scotland, in August at the Edinburgh Fringe Festival.

“This should be a life changing experience for all involved,” says Jim Murphy, NECC Theater professor.

This group of theater and music students, many of whom have never traveled out of New England let alone to the British Isles, will participate in the festival as part of the college’s study abroad program.

Tickets are $8 for students and senior citizens and $10 general admission. Tickets can be purchased at the door or through mvarts.info

The cast and crew, who are all members of the NECC theater troupe, the Top Notch Players, along with theater professors Susan Sanders and Jim Murphy, will spend 12 days and 11 nights participating in the Edinburgh Festival where they will perform “American Gothic; The Poems of Edgar Lee Masters,” four times as part of their involvement in the festival.

Upon completion of the trip, the students will receive three college credits through NECC’s study abroad program.

Ranging in age from 18 to 40, the student actors will juggle multiple roles and characters using songs and dances from the mid-1800s to the early 1900s as transitions. This is an original adaptation of the play.

NECC is just one of less than a dozen colleges invited to participate in this intercollegiate theater festival.

It has been the responsibility of the theater group to raise $20,000 for the trip. To date, $7,500 has been raised through theater performances and bake and book sales. An upcoming comedy night is planned at the Claddaugh Pub on Essex Street in Lawrence on Saturday, April 21, featuring comedians Dave Rattigan, John Turco, and Matt Donaher.

The Top Notch Players, who will attend the festival August 3 through the 15th are accepting donations. Donations can be made by contacting Susan Sanders at ssanders@necc.mass.edu or Jim Murphy at jmurphy@necc.mass.edu