NECC Holds a Pie Contest in Celebration of Pi 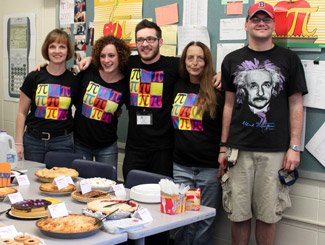 Pies were the center of attention on Northern Essex Community College’s Haverhill campus, when The Math Center and Math Resource Center held their fifth annual Pi Day celebration on Wednesday, March 21 with a pie contest.

More than 50 people attended the standing room only event. Some attendees munched on pizza ‘pies’ that were served before the official cutting of the traditional pies entered into the contest, while others worked on the math lab computers while they waited to sample the pies.

Judges, including Andrew Wysocki of Haverhill, an NECC 2011 alumni and tutor in the math lab, Marilyn McCarthy of Andover, developmental reading department faculty, and Gerry Morin of Belmont, global studies department faculty, sampled each of the pies during the judging.

Fifteen pies—ranging from spaghetti pie to traditional apple pie—were entered into the contest by faculty staff and students, and prizes were awarded for best overall pie, most original pie, and most mathematical pie.

“The most mathematical pie is judged by visual appearance,” said Wysocki, who handed David Baker of West Newbury, the award in that category. He made an apple pie with a pi symbol cut out of the top.

Charlie Lagasse, an NECC multi-media student from Newburyport, who won for overall best pie said, “I didn’t think that I would win because mine was a basic pie and there was some pretty elaborate pies, so it came as a surprise.”

Eve Lopez, of Plum Island, also won in the category for most original pie with her homemade spaghetti pie.

The Math Center is designated for all walk-in tutoring. Located on both the Haverhill campus and the Lawrence campus, the centers are staffed by professional and peer tutors who work days and evenings to best accommodate students.