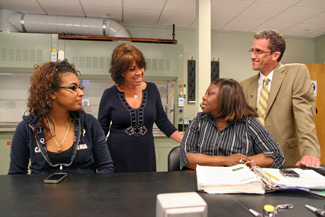 Where there once stood a few tight classrooms and a narrow hallway in Northern Essex Community College’s Louise Haffner Fournier Education Center on the Lawrence campus, now stands a state-of-the-art chemistry lab outfitted with gleaming stone counters and chrome fixtures thanks to a donation by the Technical Training Foundation.

The Foundation donated the funding to create the 1500 square foot general chemistry lab. The lab, which is now used by students who are enrolled in Introduction to Chemistry and Physiologic Chemistry courses, is the first such lab on the Lawrence campus. Previously, all students had to travel to Haverhill to enroll in and attend a chemistry course. 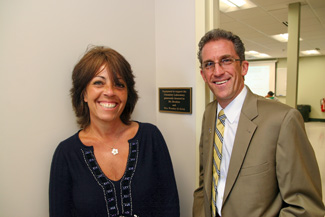 Suzanne Wright, daughter of the late Dr. Irahim El-Hefni, and President Lane Glenn unveil the plaque bearing there name which is mounted at the entrance of the new chemitry lab in the Fournier Education Center on the Lawrence campus.

“It’s an exciting day here at the college,” said NECC President Lane Glenn. “This is a pretty important addition to Northern Essex Community College. This is the first time we have had a classroom like this on the Lawrence campus.”

He thanked Suzanne Wright, the daughter of the late Dr. Ibrahim El Hefni, for whom the Foundation is named. The El Hefni family, he noted has been a strong supporter of the college, donating to the chemistry lab as well as the Dr. Ibrahim El Hefni Allied Health and Technology Center currently under construction on Common Street where the InTown Mall once stood.

NECC Vice President of Academic Affairs Bill Heineman thanked everyone involved in the creation of the chemistry lab especially the Fournier Family whose employees assisted in the renovations. A year ago, when it was a cluster of classrooms, Heineman said, it was hard to envision it as a spacious, elaborate science lab.

“We are really excited to have this space,” Heineman said. “There are close to 3,000 students on the Lawrence campus. This space will allow us to expand our offerings. This is evidence of the good things happening in this city.”