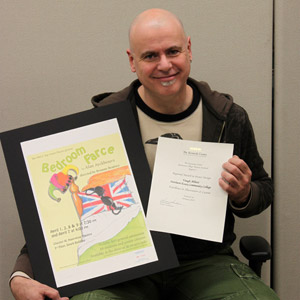 Affiliated with the Kennedy Center in Washington DC, the KCACTF is a national theater program, involving 18,000 students from colleges and universities nationwide, which has served as a catalyst in improving the quality of college theater in the United States.

Northern Essex Community College’s theater department’s Top Notch Players play “Bedroom Farce” was the subject of the design of Abbott’s winning poster. Abbott won the right to design and illustrate the poster through classes he was participating in at Northern Essex. He chose an illustration which suggests that the play is a farce, set in a bedroom.

According to Susan Sanders, coordinator of theater and technical director of the Top Notch Players at Northern Essex, Abbott’s poster was chosen at the festival for the award because of its colorful and clever design. The judges also commented on the clear text and strong lay-out.

Abbott has a theater background and was once an actor. He attended the University of Maryland briefly in the theater arts program there. “I’ve seen a lot of theater posters over the years,” he said. “Sometimes it pays not to try to be too literal with your concept, and to try to be more just suggesting an idea. I’ve learned that from looking at lots of theater posters over the years. That was the concept I went with, more of an idea about what the play is about, as opposed to what exactly a play is about.”

Abbott is in his second year at Northern Essex. He attends school full time, works part time in the college’s computer lab and as a bartender in Newburyport.

Abbott will graduate from Northern Essex in December, and he is considering continuing on for a four-year degree.