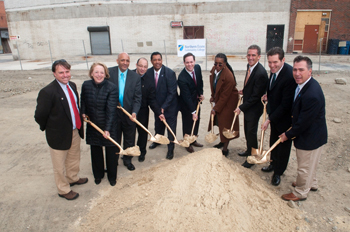 On Thursday, April 12 at 10 a.m., Northern Essex Community College broke ground on the Dr. Ibrahim El-Hefni Health and Technology Center on Common Street in Lawrence, which is scheduled to open in the fall of 2013.

The new building will replace the InTown Mall, a dilapidated three-story building built in the early 1960s, which was torn down this winter to make room for the college’s new facility.

“This is exciting news for the college and the city of Lawrence and its residents, and it would not have been possible without the support we received from the community,” said Lane Glenn, president of Northern Essex.  “With its sleek, contemporary design, this building will revitalize downtown Lawrence, bringing more students to the city and preparing more Lawrence residents for jobs in high-demand health care fields.”
When completed, the $27.4 million El Hefni Health and Technology Center will house the majority of the college’s 17 health care associate degrees and certificates, including respiratory care, sleep technology, and nursing programs.
At the groundbreaking ceremony, Glenn thanked Governor Patrick and his administration; Congresswoman Niki Tsongas; state legislators; the Lawrence mayor and city councilors; college boards such as the trustees and foundation; and donors including the El-Hefni family’s Technical Training Foundation and Trinity EMS, Inc.

“With this new facility, we will have the space to expand our health care programs, in collaboration with area employers, creating new programs in emerging fields,” said Glenn.

The El-Hefni Health and Technology Center is part of a larger plan for growth in Lawrence, according to Glenn. In recent months, a chemistry lab was added to the Louise Haffner Fournier Education Center on Amesbury Street and the college leased a facility on Franklin Street to house iHealth@NECC. NECC Riverwalk on Merrimack Street opened in the fall of 2010. The college also recently purchased the Registry of Deeds Building in Lawrence with plans to create an open green space.

“Northern Essex has had a commitment to this city for more than 40 years, and we intend on expanding that commitment and developing a comprehensive urban campus right here, working with the city, area business and organizations, and anyone else who shares our vision,” said Glenn. “When completed, Lawrence will truly be a college town.”

Student enrollment in Lawrence has increased 13 percent in the past five years.  Lawrence residents now represent nearly 25 percent of the college’s more than 7,000 students.