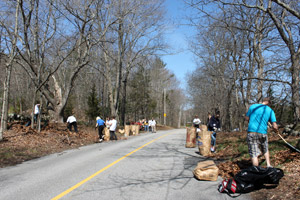 Northern Essex Community College students and faculty worked together as part of a community service project to help repair and restore the property at John Greenleaf Whittier’s Birthplace off Route 110 in Haverhill on Saturday, April 14.

Cynthia Crivaro, professor of behavioral sciences at NECC and organizer of the event said 18 students participated, and there was a waiting list. Three faculty members including Crivaro also joined in, working alongside the students. They worked throughout the day on tasks that included; inspecting and clearing the trail, picking up trash near the roadways, cleaning out the barn, and various groundwork undertakings including weed removal, raking, and clearing limbs and brush from the property.

The Whittier Birthplace was originally built in 1688 and was the home to the famous author, John Greenleaf Whittier, from 1807 until 1836. Whittier was a poet and abolitionist, most famous for his book-length poem Snow Bound.

The museum was formally opened in 1893 when Mayor James Carleton purchased the house and land and presented it to the Haverhill Whittier Club. The house and grounds are maintained for visitors so that the love and memory of Whittier might forever be cherished. 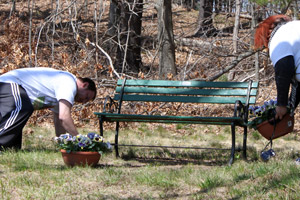 Marc St. Louis of Haverhill and Joyce Cedeno of Lawrence

Glen Hamilton, Trustee and chairperson of the grounds and buildings, worked with the students during the course of the day. “This is a tremendous amount of help,” Hamilton said. “There is no way would be able to do all this without the students.” He said he was particularly touched when a group of students took it upon themselves to clean up the area around a bench that was dedicated to his father, the late Gordon Hamilton a long standing supporter of the Whittier Birthplace, and put flowers by it.

This is the third year that that volunteers from Northern Essex participated in a project to help the Whittier Birthplace. Volunteers were given a free tour of the Whittier home by Gus Reusch, the museum curator, and received a commemorative T-shirt, and lunch and snacks from Crivaro.
Jamie Walker of Bradford, a multimedia student at NECC, said, “I was in the original class that did this in the fall of 2009. This is the third time. I liked it so much I had to come back. To see the work that we do here, it’s amazing.”

Community service is an experience, as opposed to an educational philosophy, where students connect with the local community, satisfying a need in various, usually non-profit, agencies whose populations are often considered in need and at-risk.

The primary purpose of community service is to foster citizenship and an ethic of service through volunteerism in the local community. Specifically, community service contributes to a greater sense of civic responsibility in students, and enhances communication, teamwork and creative thinking. In most cases, it does not carry primary academic credit, though significant student learning usually occurs.

For more information, contact Professor Cynthia Crivaro at ccrivaro@necc.mass.edu or at 978-556-3684.