Bradford’s Greenleaf Elementary School is where NECC got its Start 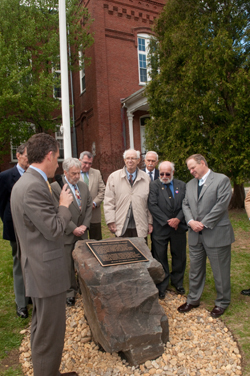 As part of its 50th anniversary celebration, NECC dedicated a plaque at the Greenleaf School in Bradford, which is where NECC opened its doors.

While elementary school children played in a playground nearby, representatives from Northern Essex Community College and the community gathered in front of the Greenleaf Elementary School to dedicate the spot where the college opened its doors in 1961.

Attorney Joseph Edwards of Haverhill, a 1964 graduate of the college and chair of the board of trustees, marveled at how little the building had changed since he attended classes there almost 50 years ago. “It looks exactly the same.”

Northern Essex has just 181 students when the first class started in the fall of 1961. For 10 years, the college was located in the Greenleaf School on Chadwick Street in Bradford. Eventually it moved to the old Haverhill High School which is now City Hall, and Elliott Street became its permanent home in 1971.

The college now has 13,000 students, and over the years, has opened several campuses in Lawrence including the Dimitry Building on Franklin Street, the Haffner Fournier Education Center on Amesbury Street, NECC Riverwalk on Merrimack St., and iHealth, also on Franklin St. The Dr. Ibrahim El Hefni Health and Technology Center on Common St. in Lawrence is under construction with plans to open in the fall of 2013.

Mayor Fiorentini shared how different it was in the 1950s and 1960s when only a small percentage of high school graduates attended college. “Northern Essex provided hope and opportunity for working class kids, who could now afford college,” he said. “Over the years NECC graduates have built our community.”

Landry, the former dean of students, said Harold Bentley, the founding president of the college, interviewed him for a job as a math professor on the front steps of the Greenleaf School. “After 45 minutes, he told me he wanted me to teach here.”

At the dedication, Landry was reunited with Rosemarie D’Agata Webb, a student from NECC’s first class, who was thrilled that her former teacher recognized her after 50 years.

For Jonathan Aguilar '18, it was a single Northern Essex Community College dual enrollment course that set him on the path to his dream career. The Lawrence High School graduate, curious…
More articles »

New Director of Corporate and Community Education is Paying It Forward

Haverhill and Lawrence, MA (August 5, 2022)— For nearly 30 years, Linda Schildkraut had a successful career in business-to-business solutions, sales, and team development in the New York City area. During that time, she saw firsthand how both employees and…
More articles »

This article was adapted from an article that appeared in the spring edition of alumnecc magazine Nearly every student has heard it at some point in their academic career: if you need help, just ask. But for some students, especially…
More articles »

Haverhill and Lawrence, MA (August 15, 2022)—Northern Essex Community College is offering five new English for Speakers of Other Languages (ESOL) Career Skills classes for the 2022/2023 academic year. These classes, offered through the NECC Center for Adult Education, are…
More articles »

Haverhill, MA (August 17, 2022) – Northern Essex Community College will host a fall enrollment event on the Haverhill Campus this Saturday, August 20. NECC Enrollment staff will be available to help students get started this fall. Students and their…
More articles »