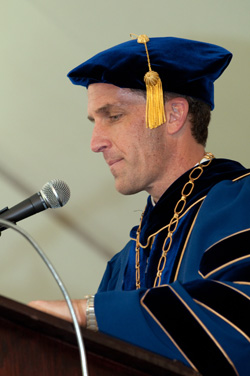 “But as much as today is an inauguration, even more importantly, it is a celebration of all that this college is today, and all that it is to become tomorrow,” Northern Essex Community College President Lane Glenn told an audience of more than 500 who attended his inauguration under a large white tent on the Haverhill campus quadrangle Monday late morning.

“So as I stand here today, not alone as the newly inaugurated president of NECC, but alongside the students, the faculty, the staff, and the supporters of education in our community who are Northern Essex Community College,” he said, “Here is the bold and simple vision I have for this college’s future: that we will tirelessly devote our time, our talents, and our resources to ensuring that everyone in our part of the Merrimack Valley who has a dream of college and what lies beyond: is prepared for college, participates in college, and persists through college.”

His remarks followed greetings given by several local dignitaries and friends of the Northern Essex Community College community. At times serious, at times jovial, the greetings were met with laughter and applause.
“Lane would be the first to say that this is the college’s day,” said William Heineman, vice president of NECC academic affairs, while introducing an NECC Achieving the Dream video highlighting several NECC students, faculty, and staff.

John F. Tierney of the U.S. House of Representatives said lofty goals and aspirations have been set by Congress, and he is confident NECC will meet those goals because Glenn understands that “community colleges are a gateway” to higher education.

Dr. Richard Freeland, Commissioner of the Massachusetts Department of Higher Education, said the fact that President Glenn was previously vice president of academic affairs at NECC served the college well. “We know Lane Glenn. Happily this college campus knows his work. Students know him. Faculty knows him for his high standards. The community knows him for his incredible role on this campus. This campus knows he is a good leader. I know him for his high intellect.”

Freeland said Glenn is the man to move the college forward. “He will help the college fulfill its potential in every way.” 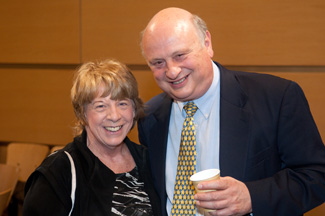 President Emeritus David Hartleb told the crowd he met President Glenn six years ago when Dr. Glenn was a candidate for the vice president’s position. In the intervening years, they had become friends though he admits they have different styles and strengths.

“He lives the principals of Appreciative Inquiry,” Hartleb said.

With Lane Glenn as president, Hartleb, who served for 15 years, said the college will continue to grow and soar.
The Rev. Thomas Bentley, son of the late Harold Bentley, founding president of Northern Essex, said his father and President Glenn share the gift of seeing the possibilities within the college.

As a community college graduate President Glenn understands the role that Northern Essex plays in higher education, said local attorney and NECC alumnus Joseph Edwards, on behalf of the Trustees. “I can’t think of anyone more qualified to bring the college forward.”

NECC English professor Terry Cargan, who spoke for the faculty and staff, said when she polled fellow faculty members what words they would use to describe President Glenn she came away with a list that included dedicated, dynamic, personable, optimistic, challenging, and energetic.

“We know he will be unstoppable,” said Attorney Dawne Young, who spoke on behalf of the alumni. She noted that President Glenn would continue the college’s mission to provide college education to all. 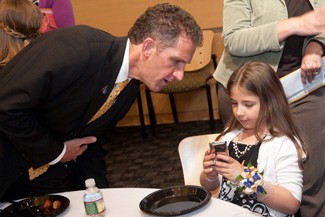 Al Getler, publisher of The Eagle Tribune, said since Glenn’s appointment in July, he has already proved to be a dependable leader in Haverhill, Lawrence, and the Merrimack Valley.

The NECC Chamber Chorus under the direction of director Alisa Bucchiere, sang “Northern Essex Raise Your Banner High,” and “The Impossible Dream”.

The Essex Chamber Music Players under the musical direction of Michael Finegold, performed “Fanfare with Variations,” composed by Finegold in celebration of NECC’s 50th anniversary.

The NECC student jazz/rock ensemble under the direction of Michael Lecuyer, performed “I’ve Got Rhythm,” by George Gershwin.

The processional was led by Matthew Phelps and the Stuart Highland Pipe Band.

Glenn is the fourth president of Northern Essex, which was founded in 1961. The college celebrated its 50th anniversary and Glenn’s Inauguration with a host of events including presentations by Dr. Franklin Chang Diaz, NASA’s first Latino astronaut, a 50th celebration on Friday night at which 50 individuals were recognized for Making a Difference in the lives of others, a dance performance by NECC’s Still Point Dancers Saturday night that included an aerial ballet piece, and a performance by the NECC Chorus on Sunday afternoon. 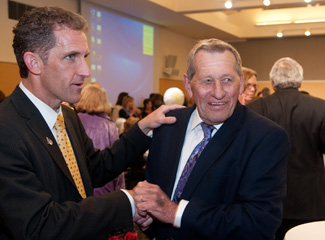 A resident of Amesbury, Dr. Lane Glenn became president of Northern Essex on July 1, 2011. Prior to his appointment, he served as vice president of academic affairs for five years.

He is focused on student success and is passionate about finding ways to help students achieve their educational goals, especially students who are underprepared for college.

At Northern Essex, he has provided leadership for the college’s involvement in Achieving the Dream, a national effort to help more community college students succeed, with a special focus on students of color and low income students. In the past four years, the college has adopted many new initiatives, including enhanced academic advising, new tutoring resources, a college success skills course, and more, designed to increase retention and graduation rates.

In addition, he expanded the college’s relationships with local high schools and partnered with local employers, such as Raytheon, to develop programs that deliver the skills most needed in the job market.
Dr. Glenn has also served as dean of academic and student services at Oakland Community College near Detroit, Michigan; and on the faculty at Lansing Community College in Lansing, Michigan.

He is proud to say he got his start at a community college: Rose State College in Midwest City, Oklahoma.