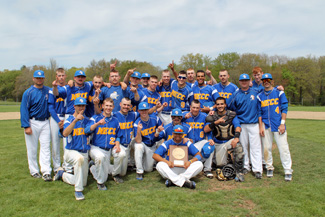 It was a busy and productive weekend for the Northern Essex Community College Knights men’s baseball team. In addition to beating Bunker Hill Community College, 16 to 4, in the National Junior College Athletic Association (NJCAA) Division XXI championship game, the team took nine out of the 20 spots on the All New England Selections. The championship was held this weekend at Massasoit Community College in Brockton.

The Coach of the Year award went to Coach Chris Shanahan. Manual Cabral was named The Defensive Player of the Year.

The NECC Knights entered the division championships, having won 17 straight games in a 25-7 season. The team led all Division 3 teams nationally in hitting with a .387 average.