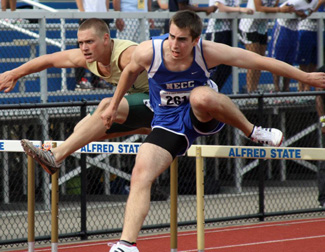 It was an historic day for the program with all three men on the podium in their respective events. This was the most since 2006. Dan Busta of Plaistow, NH, Gabe Frias of Salem, NH, and Anthony Giorgi of Sandown, NH, all received Coaches Association All-American Honors.

Giorgi ran an incredible race with a time of 15.75 placing third in the 110 hurdles setting a new school record. This is the best place a male athlete has had at Nationals since 2006.

Frias ran a gusty race finishing in sixth place. He will be attending the University of New Hampshire next year. He has a tremendous future as a hurdler.

Busta also had his best throw of the season in the javelin with a toss of 43.31 meters landing him in sixth place.

“These three men were amazing this weekend in the biggest stage of our sport. I told them all it takes is one throw, one race, one chance to be a champion and they did exactly that,” said NECC Track and Field coach Andy Barron. “They were focused, determined and ready to go up against the best Division III had to offer. I couldn’t be more proud they showed what it takes to be a winner and I’m thrilled to have been able to coach them this season.”