Student Speaker is from Merrimac 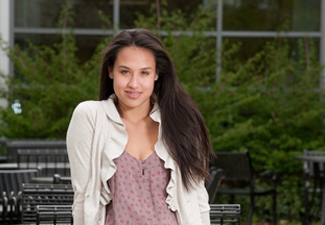 Cecilly Deorocki of Merrimac has been selected to address the graduates as the student speaker at Northern Essex Community College’s May 19 Commencement.

A 2009 graduate of Pentucket High School, Deorocki calls Northern Essex “The school that changed my life.”

Deorocki was nominated to be student speaker by three of her professors, Paul Chanley, Cj Crivaro, and Mary Janowicz.

As Crivaro wrote, “She knows what she wants academically and she goes after it with focus, purpose and gusto.”

While at Northern Essex, Deorocki was a tutor in the college’s math center and a member of Phi Theta Kappa honor society.  She also was featured in a college video on student success which premiered last month.

Deorocki plans to continue her education at a four-year college in the fall, studying philosophy and political science/legal studies.  Graduate school is definitely in her future.

For the fall, she has been accepted to Hampshire College, Eugene Lang The New School for Liberal Arts, and Flagler College, and she is still waiting to hear from several other colleges.

Close to 1300 graduates will receive certificates and associate degrees at the college’s 50th Annual Commencement.

Marty Meehan, former US Congressman and current chancellor of UMass Lowell, will be the featured speaker.